You are here:
Science 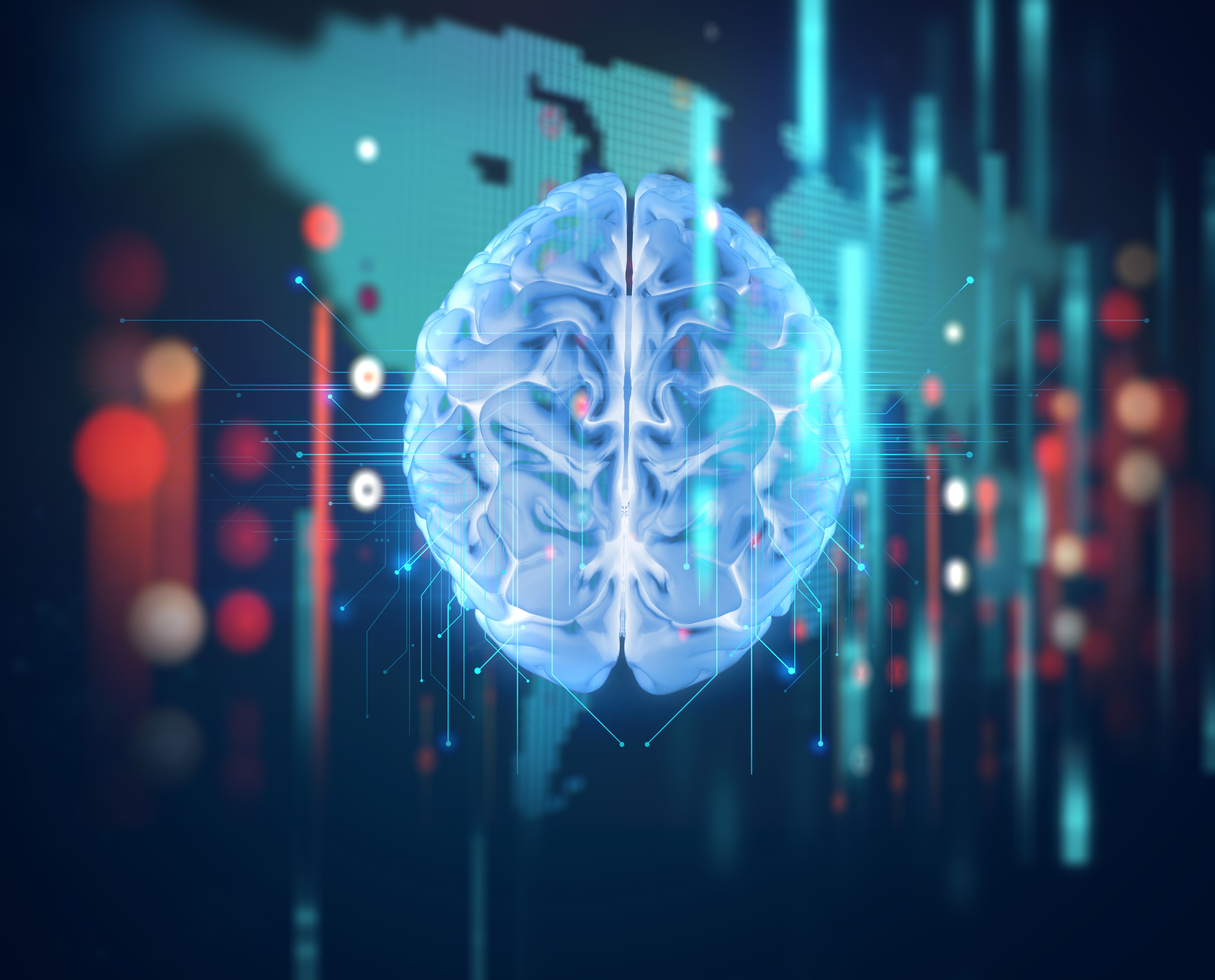 Transhumanism sounds like a crazy idea, but we need to take it very seriously

Since antiquity and even before, man has dreamed of casting off the chains of bodily existence and taking on the characteristics of the gods. The modern version of this dream is called transhumanism, the aim of which is to use technology to fundamentally overcome the intellectual, physical or psychological limits of human existence. What on first hearing might sound like a good idea is in fact a fundamentally antihuman and totalitarian ideology with a strong neo-religious component. Many of the ideas proposed are not remotely feasible, not only in the present time but on a fundamental level, but this does not take away from their incendiary and destructive potential.

Since the very earliest times, we humans have dreamed of overcoming the limits imposed by our normal bodies. One of the oldest artefacts ever discovered is the “Lion-Man of Hohlenstein-Stadel”. This small sculpture, which was found in a cave in southern Germany, depicts a human with the head of a lion, and is thought to have been fashioned about thirty thousand years ago (Old Stone Age), at about the same time as Homo sapiens first appeared in Europe. This trope of combining human and animal attributes is a staple of ancient cultures, one of the best-known examples of which is the Minotaur, half-bull, half-man, of ancient Greek mythology (ca. 520 B.C.). In recent popular culture, the merging of man and animal has been displaced by the merging of man and machine. This is a theme beloved of fans of science fiction (like myself), famous examples being the Borgs from the Star Trek franchise (who can forget the subtle erotic power of the Borg Queen?) and the less well rendered and clunkier Robocop.

As a narrative device, such creations allow us to explore themes such as the nature of consciousness and personhood and the interaction of the individual with the collective. But no-one really takes them seriously, no more than anyone really believes that we will soon be able to travel back in time or beam ourselves from one location to another.

Or at least, that is what you might think.

In fact, exactly such ideas are being pursued with great earnest right now by thousands of technically-minded individuals throughout the world. Among these individuals are many of the most prominent members of our technical elites. The ideas might be crazy, but these men (women are very underrepresented in the transhumanist community) are deadly serious. As far as is known, the word “transhumanist” was invented by the eugenicist Julian Huxley (1987-1975) in his book “New Bottles for New Wine”, written in 1957. Julian is also thought to be the source of many of the ideas presented in the dystopian novel “Brave New World”, written by his more famous half-brother Aldous Huxley (1894-1963) in 1932. As an aside: Many read “Brave New World” as a warning; increasingly, I tend to read it as a blueprint.

Other important proponents of the transhumanist movement are the cognition scientist and expert for artificial intelligence Rodney Brooks (1954-) and the expert for nanotechnology Eric Drexler (1955-), both from the Massachusetts Institute of Technology, the Austrian robotics expert Hans Moravec (1948-), from the Carnegie Mellon University in Pittsburgh, the biophysicist and expert for bioethics Gregory Stock (1949-) from the University of California at Los Angeles, and another bioethicist James Hughes (1961-), currently working at Trinity College in Hartford, Connecticut. The geneticist and proponent of neo-Atheism Richard Dawkins (1941-), formerly of Oxford University in England, also has links to the transhumanist movement, although not one of its key members.

Perhaps the best known of the transhumanists today is the expert for text and voice recognition Ray Kurzweil (1948-). His bestselling book “The Age of Spiritual Machines”, published in 2000, was the first to popularize the idea of the “singularity”, the point at which the sum total of machine intelligence exceeds the sum total of human intelligence. After this is reached, it is postulated that machines will begin to reproduce and optimize themselves with exponentially increasing speed, essentially rendering humanity obsolete. The April 2013 edition of the popular computer magazine “Wired” showed a photograph of Ray Kurzweil above the caption “Live Forever”. 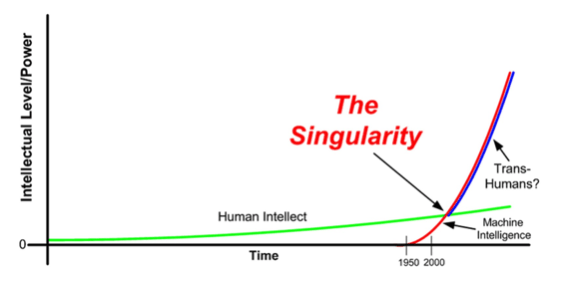 Kurzweil has also published a graph showing the “Countdown to Singularity”, which is predicted to be imminent. After the singularity, the only option left to humanity will be to upload its consciousness into the machine and exist in a virtual form, essentially indefinitely – hence the caption “Live Forever”. It has even been proposed that humans who do not wish to take this step will be allowed to live on in conventional form as a type of “protected species”. There is even a name for these die-hards: “humanish”, a portmanteau word derived from “human” and “Amish” as in the Amish People of the United States who reject most modern technology. 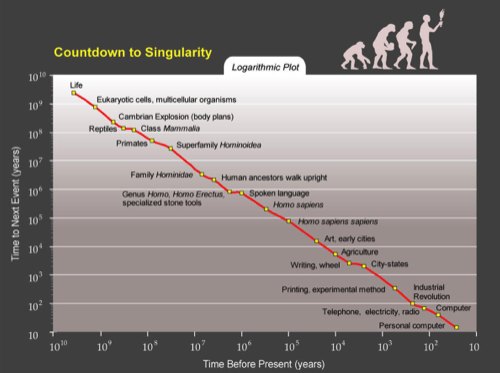 This might all be dismissed as the interesting, if slightly manic musings of an über-nerd, if Ray Kurzweil were not also the Director of Engineering at Google (now Alphabet), and a personal friend and adviser to Barack Obama when he was president of the United States.

Methods and goals of transhumanism

Proponents of transhumanism love technology. Their four areas of special interest are genetic engineering; robotics; information technology, in particular artificial intelligence; and nanotechnology. Their self-declared purpose is to study the potential benefits and dangers of emerging technologies that could overcome fundamental human limitations as well as the ethical implications of using such technologies. The most common transhumanist thesis is that human beings may eventually be able to transform themselves into different beings with abilities so greatly expanded from the current condition as to merit the label of posthuman beings (Wikipedia, 2018).

The goals of the transhumanist movement are best thought of in stages. In the short-term, they aim to increase life expectancy, increase human intelligence and overcome the physical and psychological boundaries of the human condition. And that’s only in the short term. The technology in this step will mostly involve biochemical and genetic engineering techniques, with a certain amount of prosthetic support.

Their medium-term goal is the merging of human and machine at the physical level, for example using prosthetic or implantable devices.

The long-term goal, the “real” aim of transhumanism is to merge human consciousness with machine consciousness after the achievement of the “singularity”. The beings that will emerge from this process are called “extropians”.  These beings will be able to merge their individual consciousnesses to form a “hive mind”, and will ultimately achieve immortality. At this point, as noted above, the human race as it currently exists will become obsolete and “surplus to requirements”.

Philosophical and societal importance of the transhumanist movement

Like many ideas with a totalitarian and anti-human twist, transhumanism is presented to the world as a boon for humanity. And indeed there is much merit in the use of high technology, including genetic engineering, to overcome human disabilities and diseases. The use of retinal and cochlear implants in allowing the blind to see and the deaf to hear. Computer aids are allowing people with autism to communicate. The carbon-fibre prosthetic blades available to amputees are so good that their wearers can outpace able-bodied professional athletes.

But this is not what transhumanism is really about. Fundamentally, transhumanism is much more about religion than it is about science. It has its own eschatology, its own promise of immortality. It promises communion of all and freedom from pain and suffering. It is thus the latest confirmation of the famous adage of G.K. Chesterton: “The first effect of not believing in God is to believe in anything”, and must take its place among the other “scientific religions” of our time: radical environmentalism including the sub-sects animal rights extremism, climate hysteria, overpopulation hysteria, and radical vegetarianism; radical economism of both the neoliberal and neo-marxist varieties; postmodernism including the sects structuralism and gender theory.

In common with these other neo-religions, transhumanism uses the language of science to transport ideas that have nothing to do with science. As Karl Popper pointed out, perhaps the most fundamental attribute of a scientific idea is its falsifiability. Scientific knowledge is always contingent, never absolute. If it not possible to conceive of an experiment that would refute a statement, then that statement does not belong to realm of science. For example, the statement “All the sheep in Wales are white” is a scientific statement, because it can be refuted. In fact the discovery of even one black sheep in Wales would suffice. This is not true of the statement “There is no God”, which cannot be refuted by experimental means.

Depressingly, most of the adepts of the new “scientific religions” don’t even get this far. Many of their notions have been refuted on a scientific level over and over again, and yet they persist. This is also true of the transhumanist movement. The October 2017 edition of “Scientific American” contained an article entitled “Why do smart people do foolish things?”, which pointed out that there is a big difference between intelligence and critical thinking. I would say that there is an even bigger gap between wishful thinking and critical thinking.

No-one today has any idea what consciousness is, or where it is located. Nor do we know what memories or are or how or where they are stored. Increasingly, it is becoming clear that cognition is localized not only to the prefrontal cortex or even the cortex in general, but may be spread in some rudimentary form throughout other neural networks in the body, including those in the heart and the gut. A comparison is drawn between the brain and the computer as if these were somehow analogous. Apart from some crude functional overlaps, nothing could be further from the truth.

Thus, contrary to what is often reported, the danger of the transhumanist movement does not lie in its potential for success, in its ability to make redundant the human race. This will not occur. Its danger lies in its fostering of a deeply materialistic and mechanistic view of humanity, a view that is fundamentally totalitarian and anti-human. As the German biomedical journalist Stefan Rehder has remarked: “The measure of danger of an idea is not its level of feasibility, but the extremes to which its proponents are prepared to go in order to enact it.” Among the proponents of the transhumanist idea are some of the most influential people on the planet. Their ideas are seductive and particularly attractive for technocratic regimes. We ignore this movement at our peril.

Fertility against climate change, the false dilemma of Germany
February 24, 2022

Slovakia: Mothers will be able to see and hear the beats of the fetus before making the decision to abort
November 29, 2019

There is hope for women who experience postpartum depression
November 25, 2019

The incredible moment a baby is born inside the amniotic sac during a C-section
November 13, 2019
Search
Categories
Recent Posts
Go to Top