Surrogate motherhood report rejected by the Council of Europe

The ONE OF US Federation applauds the rejection of the “de Sutter” report on Human Rights and ethical issues related to surrogacy by the Council of Europe (CoE) Social Affairs, Health and Sustainable Development Committee. The report intended to add a legal framework to, thus authorizing and encouraging the practice of, surrogate motherhood despite the clear breach of women and children human dignity it induces.

3 days before the meeting of the CoE Committee gathering in Paris, the One of Us Federation gathered over 1200 persons in the French capital for the 1st ONE OF US Forum. Together with major European leaders, including 4 ministers in exercise or retired, ONE OF US called for the complete ban of gestational surrogacy and a clear stance by all western authorities, home of the “buyers” to stop this traffic which involves poor women and children, most of them from developing nations.

During the Forum, Prof. Gian-Luigi Gigli, Italian MP and President of the Movimento per la Vita, declared: “Our society authorizes a certain form of neocolonialism through gestational surrogacy”. The event was followed by the first One of Us Award that was given to PATARAMON CHAMBUA, a Thai woman who was once the famous victim of this practice, by giving birth and deciding to keep with her “baby Gammy” despite all odds and pressure. 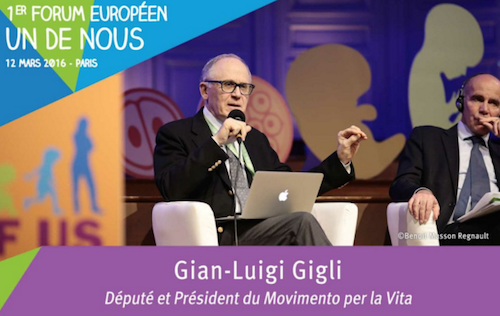 The European Parliament entirely approved paragraph 114, condemning “the practice of surrogacy, which undermines the human dignity of the woman since her body and its reproductive functions are used as a commodity”. The European Parliament also “considers that the practice of gestational surrogacy which involves reproductive exploitation and use of the human body for financial or other gain, in particular in the case of vulnerable women in developing countries, shall be prohibited and treated as a matter of urgency in human rights instruments”. This is a big victory for Human Dignity.

The ONE OF US European Federation for Life and Human Dignity is an international non-profit, non-political and non-denominational Federation legally registered under Belgian law. To date it is composed by 31 national and local member entities who participated in the collect of signatures during the One of Us European Citizens Initiative and provide care, counsel and advocacy free services to all throughout Europe.

Maternity Exploitation in the EU
February 2, 2021

Utero in affitto La Consulta: no alla madre surrogata in giudizio con i «due papà»
December 15, 2020

Lithuania declares the business of the surrogacy contrary to the dignity of women
August 12, 2020

The Catholic bishops of Ukraine urges to appeal to the Ukrainian authorities at all levels to condemn and ban the shameful phenomenon of the surrogacy
June 8, 2020