The director of the Institute of Life Sciences of the Catholic University of Valencia, Julio Tudela participates in the V European Forum of One of Us in Lisbon

You are here:
AbortionEventsNewsOne of Us 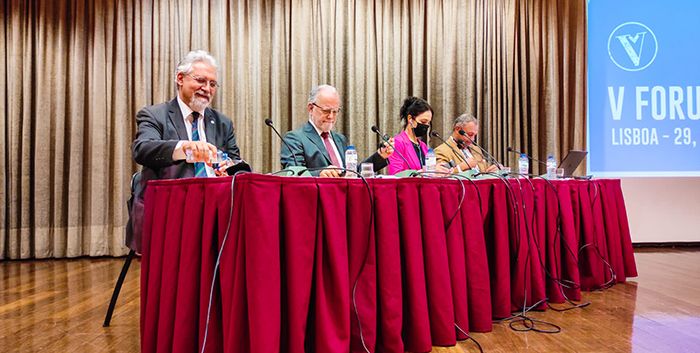 The Catholic University of Valencia, a member of the European Federation “One of Us”, was present on October 29, 30 and 31 in Lisbon, on the occasion of the celebration of the V European Forum “One of Us”. The meeting, which analyzed the Judeo-Christian roots of Europe, threats to freedom and the defense of life, was opened by Isilda Pegado, president of the Portuguese Federation for Life and Jaime Mayor Oreja, President of One of Us. It was attended by more than 200 personalities from different countries around the world.

Forum of One of Us approaches integral ecology in Europe

The director of the Institute of Life Sciences at the Catholic University of Valencia, Julio Tudela Farm Ph.D., participated in the round table ” integral ecology and the defense of life in the future of Europe” with his presentation “The defense of human life and dignity: a task threatened ”, together with the vice-president of the European Federation One of Us and the director of the French Foundation Jérôme Lejeune also established in the United States of America (read HERE) Thierry de la Villejegu, Miriam Lexmann, MEP (GrupoPPE); João Luís César das Neves, Professor and President of the Scientific Council of the Lisbon School of Business and Catholic Economics and Tonio Borg, former European Health Commissioner.

Tudela analyzed the bioethical problems derived from the consideration of abortion and euthanasia as rights, when they constitute attacks against the right to life, as well as recent attempts to limit the exercise of conscientious objection or the right of expression both in public spaces as well as in social networks for those who defend life, underlining the need to persevere in the defense of human dignity in all circumstances, specifically with the weakest: the unborn, the suffering patient or the dependent.

Along with the presentation of the director of the Bioethics Observatory – Institute of Life Sciences, four more round tables were offered. The first, focused on the Judeo-Christian roots of Europe, was moderated by former MEP José Ribeiro e Castro. The bishop of Madeira, Mons. D. Nuno Brás da Silva Martins; the Dutch Reverend Cornelius Sonnevelt; the Bishop of San Sebastián, Mons. José Ignacio Munilla Aguirre; the rabbi of the Jewish community in Lisbon, Rav. D. Rubén Switzerland; and Pr. D. Jerónimo Filipe Thomaz, from the Russian Orthodox Church in Portugal.

The third round table dealt with the current threats to freedom in Europe and the challenges of the future. It was moderated by the Slovak Miroslav Mikolasik, a member of the Executive of One of Us and a former Member of the European Parliament. The rector of the Portuguese Catholic University, Isabel Capeloa Gil; Pedro Barbas Homem, the professor at the Lisbon Law School and former rector of the European University; Christophe Foltzenlogel, legal advisor to the European Center of Law and Justice; and Lodz Peterle, former Prime Minister of Slovenia.

The fourth round table studied the demographic balance: aging and family in the future of Europe, with Christian Frei, member of the Cultural One of Us platform as moderator. The speakers were Alejandro Macarrón Larumbe, Founder and General Director of the Spanish Demographic Renaissance Foundation; Anna Zsáborská, former MEP of the Christian Union Party; Molnár Balázs, vice president of the Mária Kopp Institute; and Ryszard Stocki, Professor of Psychology at SWPS University.

Defending of the human life; testimonies

The fifth and final table was entitled: Defending life: Defending life: testimonials for the future of a Europe faithful to human dignity. It was moderated by Soemia Sibillo of the Italian Movement per la Vita and the director of Africa Life Youth, Richard Sempala; Elisa Magalini from Cav Castiglione; Weronika Przebierała, from the Colegium Internarium, Ordo Iuris; Ellen Foell of the American HeartBeat International; the Austrian Barbara Pavelka, from Lebensbewegung; the Portuguese Artur Mesquita Guimarães, from the Renovar Platform; and the Spanish Pablo Velasco, from ViViDores.

At the closing ceremony, the One of Us award was presented and the Apostolic Nuncio, Bishop Ivo Scapolo, transmitted this message to all organizations and organizers.

European Federation of One of Us objective

«One of us» is a European citizens’ initiative launched by a group of citizens of the countries of the European Union to demand that the community institutions guarantee the protection of human beings from their conception to their natural death in the areas of competence of the European Union. The initiative brings together almost all pro-life and pro-family organizations within Europe.