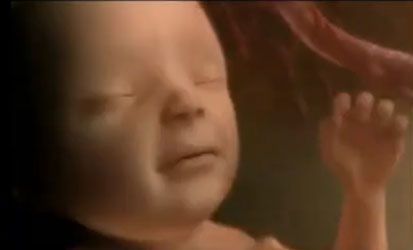 Babies learn to recognize words and sounds in the womb, scientists say. And the baby does so well at recognizing the words that he or she has memories of them after birth, research shows.

Babies learn to recognize words and sounds in the womb, scientists say. And the baby does so well at recognizing the words that he or she has memories of them after birth, research shows.

It may seem implausible that fetuses can listen to speech within the womb, but the sound-processing parts of their brain become active in the last trimester of pregnancy, and sound carries fairly well through the mother’s abdomen. “If you put your hand over your mouth and speak, that’s very similar to the situation the fetus is in,” says cognitive neuroscientist Eino Partanen of the University of Helsinki. “You can hear the rhythm of speech, rhythm of music, and so on.”

A 1988 study suggested that newborns recognize the theme song from their mother’s favorite soap opera. More recent studies have expanded on the idea of fetal learning, indicating that newborns already familiarized themselves with sounds of their parent’s native language; one showed that American newborns seem to perceive Swedish vowel sounds as unfamiliar, sucking on a high-tech pacifier to hear more of the new sounds. Swedish infants showed the same response to English vowels.

But those studies were based on babies’ behaviors, which can be tricky to test. Partanen and his team decided instead to outfit babies with EEG sensors to look for neural traces of memories from the womb. “Once we learn a sound, if it’s repeated to us often enough, we form a memory of it, which is activated when we hear the sound again,” he explains. This memory speeds up recognition of sounds in the learner’s native language and can be detected as a pattern of brain waves, even in a sleeping baby.

The team gave expectant women a recording to play several times a week during their last few months of pregnancy, which included a made-up word, “tatata,” repeated many times and interspersed with music. Sometimes the middle syllable was varied, with a different pitch or vowel sound. By the time the babies were born, they had heard the made-up word, on average, more than 25,000 times. And when they were tested after birth, these infants’ brains recognized the word and its variations, while infants in a control group did not, Partanen’s group reports online today in the Proceedings of the National Academy of Sciences.

Babies who had heard the recordings showed the neural signal for recognizing vowel and pitch changes in the pseudoword, and the signal was strongest for the infants whose mothers played the recording most often. They were also better than the control babies at detecting other differences in the syllables, such as vowel length. “This leads us to believe that the fetus can learn much more detailed information than we previously thought,” Partanen says, and that the memory traces are detectable after birth.

Research shows babies can distinguish between their native language and foreign languages when they’re just a few hours old. A study earlier this year found that and suggests they start absorbing language before birth.

The report shows sensory and brain mechanisms for hearing develop by 30 weeks of the gestational age. The study’s authors said the unborn child starts listening to the mother’s voice during the last 10 weeks of pregnancy.

“The mother has first dibs on influencing the child’s brain,” said the University of Washington’s Patricia Kuhl, co-author of the study. “The vowel sounds in her speech are the loudest units and the fetus locks onto them.”

“This is the first study that shows fetuses learn prenatally about the particular speech sounds of a mother’s language,” said Christine Moon, lead author. “This study moves the measurable result of experience with speech sounds from six months of age to before birth.”