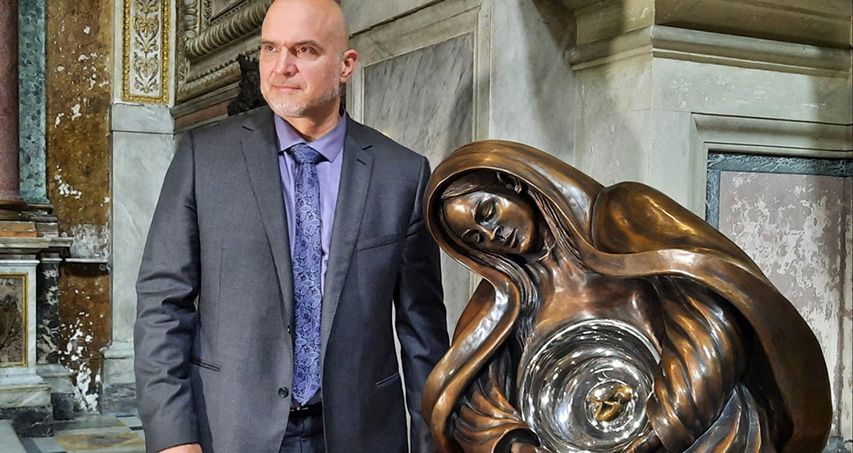 A stunning monument to life was installed in Rome this past May and is also making its way around the United States. The Life Monument is the first pro-life sculpture in the Eternal City, according to the work’s creator, Canadian sculptor Timothy Schmalz .

“Now, more than ever, with the debate underway in the United States, this sculpture, which is in Rome and also in the USA, is even more meaningful,” Schmalz said , referencing the U.S. Supreme Court Dobbs decision that ultimately overturned Roe v. Wade. “It is a celebration and also a persuasion,” Schmalz said. “I wanted to use art to persuade people and remind everyone that life is beautiful.” The Life Monument celebrates the miracle of life and the woman at the center of that miracle through a bronze sculpture depicting the mother and a world-shaped womb with the unborn child in the center. The sculpture’s design draws the viewer to the center, where the world-shaped womb crafted of mirrored steel reflects the viewer. This is so they will see themselves in the center of the artwork, representing their personal connection to the miracle of the creation of human life. The work invokes the Christ Child and unborn life. Schmalz has crafted different sizes of the Life Monument in varying materials for different causes and venues, including the 8-foot monumental size, a larger colossal size, a miniature (desktop size), and charm-sized piece as part of a rosary. He would like to see the sculpture installed in capital cities across the U.S. as a testament to life, a project that is ongoing. The National Life Monument Ghirelli rosary and glass miniature/Lisa Bourne The 8-foot bronze Life Monument permanently installed May 27 at the Church of San Marcello al Corso in Rome holds significance for its ability to convey the pro-life message to the world, Schmalz said. “[I’m] very excited to have the Eternal City having the representation of an unborn Jesus,” Schmalz told journalists upon the installation. “This is the city with the most images of Jesus in the world, and as one cardinal said to me, ‘If something comes to Rome, it comes to the world.’ I think it is very exciting to have a representation of the sacredness of all lives here.” Marina Casini, president of Movimento per la Vita Italiano, was on hand for the Life Monument’s installation in San Marcello. “The statue is wonderful,” Casini said, “not only for its artistic expression but also for the message it contains.” “Women hold the world in their wombs,” she said. “It is a fantastic message, an ecumenical message.” Schmalz spoke about how art can express the pro-life message in a report from Catholic Riproduzione autorizzata Licenza Promopress ad uso esclusivo del destinatario Vietato qualsiasi altro uso News Service. “Artwork has the power to persuade and convince and move people,” he said. “The more representations we have of a mother and child in our visual landscape,” the better. Schmalz remarked on the mirror effect of the steel womb allowing viewers to see themselves in the womb, and the reminder that all lives start in the mother’s womb. He pondered that, “perhaps that will be some sort of persuasion,” to bring people to think more deeply about the beauty of all human life. Schmalz believed it providential that the Life Monument’s installation in the Rome church came while pro-life advocates prayerfully awaited the Dobbs decision. At the time of the installation the draft majority opinion had been leaked May 2, signaling what was to come later with the June 24 release of the ruling which struck down Roe. He spoke of the need to rediscover the value and impact of “the power of the visual” regarding evangelizing about life. In the past, the visual arts contributed to teaching the faith to what was a largely illiterate society, Schmalz said. But today, the problem is not that people cannot read, rather, that they do not have time to read. People “need visual bites,” Schmalz said, and if the Church can continue “to put these positive messages that are relevant today out there, then they’re evangelizing silently, subtly.” Schmalz hopes his pro-life message reminds people of their own gift of life, and that the beauty of art will touch the hearts of those who are supportive of legalized abortion.
A colossal 2-1/2-ton version of the statue is on tour across the United States. Now in the Diocese of Brownsville, Texas, it stands in front of the Basilica of Our Lady of San Juan del Valle-National Shrine. Placement involved bringing in a special crane to move it from the maintenance yard into the plaza at the base of the Basilica’s steps. The Life Monument will remain there until the end of August. Father Jorge Gomez, rector of the Basilica, said , “Of all the places it could have gone, we are especially privileged here to have been chosen for its visit.” Erika Salazar, associate for the Diocese of Brownsville’s Pro-Life Office, shared the diocese’s gratitude: “She is beautiful! In a special way she explicitly portrays the life she carries in her womb. What is so special about this image is the beauty of seeing humanity and life within the womb. Having worked in a pregnancy center I know firsthand the importance for a mother to see her child with a sonogram. At the Shrine of Our Lady San Juan del Valle, people from all walks of life visit. Now we have Our Lady to greet them when they approach the entrance…it’s such a treat and life saving. On another note, the timing of Her arrival on June 27, was so providential! She arrived just days after Roe vs. Wade was overturned. Words cannot describe the joy that the statue of Our Lady of Life has brought to many. We are so grateful and feel God’s embrace for our diocese.” The tour will end at the end of August, with the currently touring Life Monument arriving at its permanent home in Washington, D.C. , outside the Theological College at the Catholic University of America, directly across the street from the Basilica of the National Shrine of the Immaculate Conception.
Read more.
Categories: Abortion, NewsSeptember 6, 2022
Share this post
Share on FacebookShare on Facebook TweetShare on Twitter Share on WhatsAppShare on WhatsApp