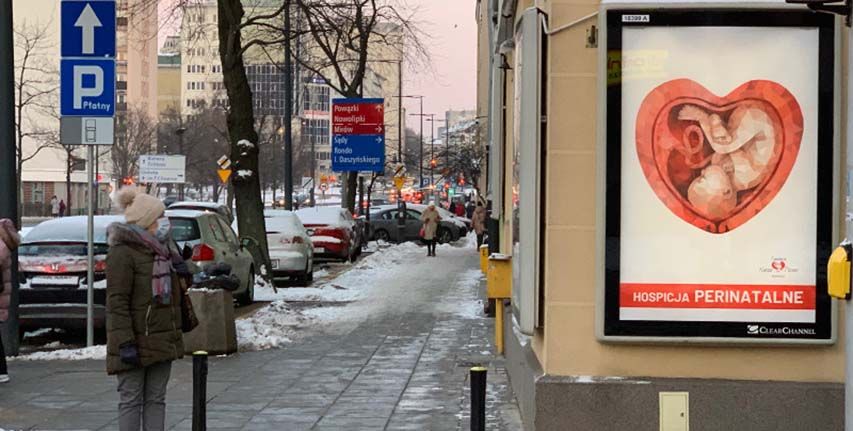 The violent protests in October have been responded to by the Polish pro-life movement with posters and billboards. A simple and powerful message: the image of a child conceived in the womb.

In October there was a violent outbreak after the Constitutional Court ruling declaring abortion unconstitutional. The decision sparked a wave of protests organized by pro-abortion groups. During the demonstrations some churches were attacked. On October 22, the Constitutional Court declared abortion unconstitutional in the event of serious and irreversible fetal damage or incurable disease that threatened the life of the fetus. In practice, in many cases, it meant the death of unborn babies believed to have Down syndrome. The ruling sparked a wave of protests organized by pro-abortion groups that led to attacks on churches. On the pro-life side, since the end of November, posters with pro-life messages have appeared in dozens of cities. The most explicit is the poster with a heart-shaped uterus. Inside, a child is lying in a fetal position. Without subtitles or slogans. Behind the campaign is the «Our Children Foundation – Education, Health, Faith». We want everyone to be able to thoroughly evaluate and interpret the message of the poster. In December, there were several large-format posters with slogans such as “I think, I feel, I do not kill”, “I give my life, I take care of it”, “Choose life” or “Every life is a gift”. The simplicity of the message has not left abortion advocates “indifferent” either.

The motivation for the ruling of the Constitutional Court of last October was made public on January 27 with a 154-page document, which among other things affirms that “the Republic of Poland guarantees everyone the legal protection of life” (art. 38 of the Constitution) and that their protection is the responsibility of the public authorities (Article 30). Any limitation of the legal protection of human life must be “absolutely necessary”, that is, treated as an absolute last resort. A disability or incurable disease of a child in the prenatal phase cannot automatically determine eligibility for termination of pregnancy.

The point to be highlighted is that the Court has declared that the burden of raising a seriously and irreversibly disabled or terminally ill child cannot fall solely on the family, but must be borne by the whole of society by introducing provisions that provide for the entire family the assistance and support they need.

From the moment of publication of the sentence, according to Polish law, abortion is allowed in two cases: when the life or health of the mother is in danger or in case of pregnancy due to rape, incest or pedophilia. This legislation is against discrimination based on health. It defends human life from the moment of its conception, since a sick child has the same value and equal right to life as a healthy child. On October 28, in a message to the Poles delivered a few days after the ruling of the Polish Constitutional Court, Pope Francis recalled the message of Saint John Paul II on the protection of life: »Through the intercession of the Blessed Virgin Mary and of the Holy Polish Pope, I ask God to awaken in everyone’s hearts respect for the life of our brothers, especially the weakest and most defenseless, and to give strength to those who welcome and care for her, even when this requires heroic love » Archbishop Gądecki, president of the Polish Episcopal Conference, welcomed the Court’s decision, which confirms that “the concept of ‘a life not worth living’ is in direct contradiction to the principle of a democratic rule of law.” No one in conscience can deny others the right to live, especially because of their illness, he added. From March 19 to 25, 2021, the Polish pro-life Association has launched a week of prayer in defense of life that will begin at the liturgical memorial of Saint Joseph and will end on the occasion of the Holiness of Life Day, in the year that Pope Francis dedicated to Saint Joseph.