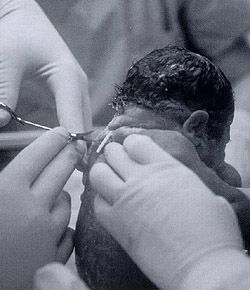 National Right to Life Note: When it comes to opening eyes, few stories carry the immediacy of those that document prenatal surgery on unborn children. Today’s contribution to our year-long “Roe at 40” series brings you Liz Townsend’s account that ran in the July 9, 1999, edition of National Right to Life News.

A baby diagnosed with hydrocephalus while in his mother’s womb was born free of the condition two months after doctors operated on his brain during a landmark open-womb surgical procedure. Hydrocephalus, a build-up of fluid in the brain that can lead to severe, disability and even death, had never before been directly treated in an unborn baby.

This operation is only the latest advance in the fast-growing field of fetal surgery. “In the evolution of obstetrical care, there’s no turning back now,” Dr. Joe Bruner, part of the fetal surgery team of Vanderbilt University Medical Center in Nashville, Tennessee, told NRL News. “More and more conditions are being treated before birth, and hopefully more doctors will be trained in the field.”

Bruner and his colleagues operated on Susan Borkowski of Knoxville, Tennessee, and her unborn baby March 2, four weeks after a routine ultrasound led to a diagnosis of hydrocephalus. Mrs. Borkowski lost a brother to hydrocephalus when she was only 6 years old, according to the Tennessean, so she and her husband James began to search for a way to give their baby a chance for life.

They discovered information about Vanderbilt’s fetal surgery program on the Internet and contacted the doctors. “We had no idea that people capable of doing this were just three hours away,” Mr. Borkowski told the Tennessean. “Now [the baby] had a chance.”

The University’s review board had recently approved a plan to attempt to treat hydrocephalus by open, womb surgery, the Tennessean reported, and after more tests to make sure the baby was an appropriate candidate for the surgery, the operation was performed on the 24-week-old unborn baby boy.

During the one-hour operation, Dr. Bruner opened Mrs. Borkowski’s uterus, and the baby was partially removed, the Associated Press (AP) reported. Dr. Noel Tulipan placed a small tube called a shunt in the baby’s brain, which was connected to another tube that drained the excess fluid into the amniotic sac. The baby was then returned to his mother’s womb to wait for birth.

This operation was the first to treat hydrocephalus with open-womb surgery. In the mid-1980s, about 40 unborn babies with the condition underwent a procedure in which the shunt was inserted through the mother’s abdomen into-the baby’s brain, Bruner said.

The operations were unsuccessful, because “the drain itself was not very good and the diagnostic tests available weren’t able to narrow the field down,” Bruner explained. “Some babies who were shunted shouldn’t have been. There are many causes for hydrocephalus, said Bruner, and “not all can be expected to improve with a shunt.”

After the unsuccessful results of the 1980s operations, there were no more attempts to treat hydrocephalus in the womb until now. Current technology has improved so much that doctors can determine the right candidates for such an operation, can use a shunt that drains the fluid well, and can operate directly On the baby through open-womb surgery.

On May 12, baby Neal Borkowski was delivered by Caesarean section, weighing four pounds, Seven ounces. Doctors replaced the original shunt with one that would continue to drain the fluid into his abdominal cavity, according to the AP.

However, the doctors can’t be sure Neal will continue to develop normally, since it is not known if the disabilities found in babies with hydrocephalus are caused by the fluid build-up or if the build-up is the result of previous brain damage.

“Does hydrocephalus cause brain injury or is it just the tip of the iceberg?” Bruner asked. “We won’t know until Neal is older.”

Whatever the future holds for Neal, his parents said they are thrilled that he has a chance to live. “He is gorgeous,” Mrs. Borkowski said, according to the Tennessean. “It’s like a dream,” added her husband.

Currently, unborn babies with birth defects can be treated by fetal surgery at only three locations in the United States: Vanderbilt, Children’s Hospital of Philadelphia, and the University of California at San Francisco. The programs have treated spina bifida, tumors, and other conditions with increasing success. However, Bruner said that Vanderbilt’s average patient, travels 1,500 miles to the Center, which is impossible for many families in need of the surgery.

In addition to increasing the number of programs, another obstacle rests in people’s attitudes about birth defects and prenatal testing, according to Bruner. “Up until recently, there was not much we could do if diagnostic tests found birth defects, said Bruner, “The woman could either continue the pregnancy without treatment or have an abortion. Even now, many women view such tests as a search and destroy mission.”

However, with the dramatic advances in fetal surgery, many conditions can be treated – – but only if they are discovered in time to have an operation. ,Many women find out too late,” Bruner said. “They need to understand that there is treatment available.”

James and Susan Borkowski know firsthand that a prenatal test showing a serious birth defect does not have to lead to the baby’s death. “We went all the way with scientific breakthroughs,” said James Borkowski.