ONE OF US FEDERATION IS CO-SPONSORING THE EVENT "SALE OF BABY ORGANS: TRUTH ABOUT THE ABORTION INDUSTRY" THAT WILL TAKE PLACE AT THE EUROPEAN PARLIAMENT. 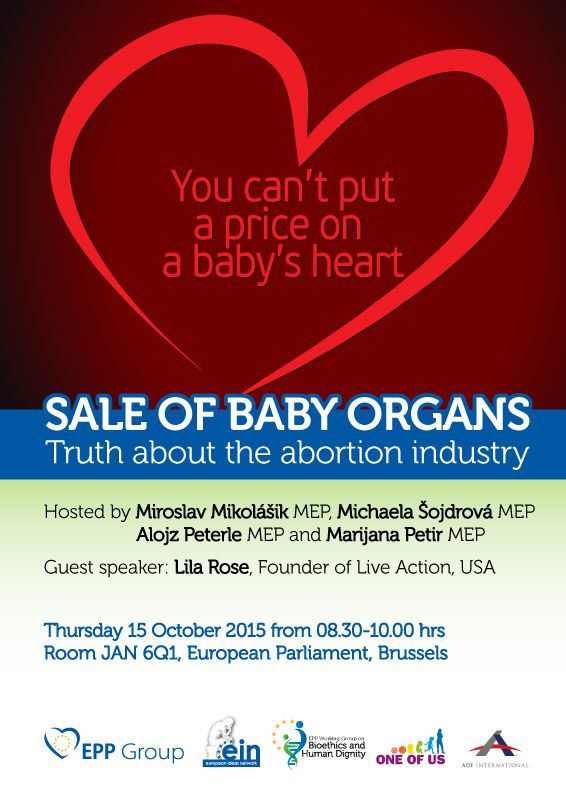 In the wake of the US “Planned Parenthood” human trafficking scandal: the One of Us Federation is co-sponsoring an event: “Sale Of Baby Organs: Truth about the abortion industry”, the event will be hosted by Mr. Miroslav Mikolasik (MEP) and the EPP Working Group on Bioethics and Human Dignity in the European Parliament. The event will take place in Brussels at the European Parliament on Thursday 15th October in Room JAN 6Q1 from 8:30 to 10:00 AM.

During this event, Ms. Lila Rose, American activist and founder of Live Action will be the guest speaker. Ms. Lila Rose conducts undercover investigations of abortions facilities in the United States, including affiliates of Planned Parenthood Federation of America. She will provide us with first hand testimony on the recent and previous revelations of sale of human baby parts performed by Planned Parenthood in the USA.

The One of Us Citizen’s Initiative that gathered 1.8 Million signatures all over Europe had specifically alerted on the risks and tragedy of programs that implies the destruction of human embryos, namely the research on human embryos and EU funded programs in developing countries including abortion. Today, these risks are made obvious through the videos released in the United States where officials from the IPPF US affiliate admit openly the organization’s wide involvement in human body parts trafficking through the explicit efforts and sales of aborted embryos body parts to for-profit companies.

In the light of these developments, the One of Us Federation demands with a renewed conviction today a true and full democratic debate and investigation on risks of human trafficking that EU funded research utilizing human embryos parts may create, or those abroad including abortion in which organizations like IPPF may be involved. The One Of Us Federation is joining a global coalition that is rallying for a deeper investigation on the worldwide implications of US affiliated IPPF member scandal.

Because One Of Us Federation and its 27 national member organizations from 17 EU Members States are convinced that “you can’t put a price on baby’s heart”, we call for a proper investigation against organizations involved in the traffic of human embryo parts and IPPF’s role in it, which should be accompanied, but not limited to, banning them access to all public funding and restricting their access to International Organizations’ official forums until their participation in the traffic has been proven false.

The One Of Us Federation is joining the spontaneous social media campaign calling for defunding IPPF and all organizations involved in this scandal. We call all our Members and supporters to join them.