On January 25th, ONE OF US is walking in Paris against euthanasia to protect the weak 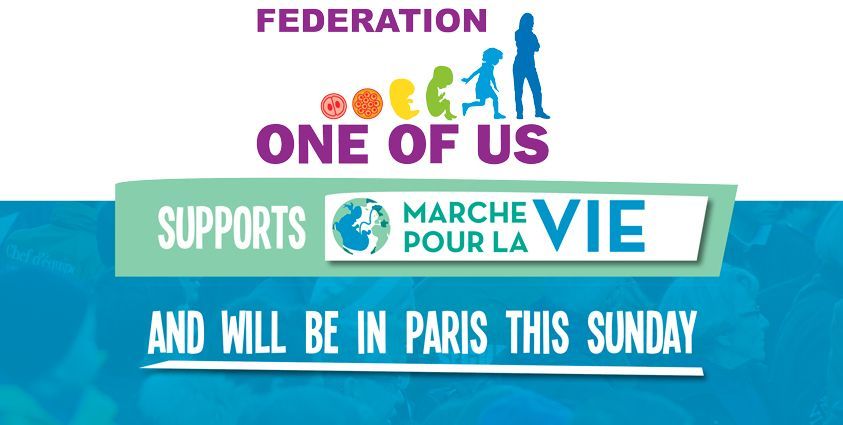 The European citizen’s initiative ONE OF US has collected the signatures of 2 million citizens who wish to denounce the funding, by Europe, of research destroying human embryos. This initiative has just given birth to the ONE OF US European Federation composed of our national associations who wish to promote a culture of life in Europe in order to protect life from conception to natural death.

Next January 25th, our associations, brought together within the One of Us European Federation, will be in Paris to take part in the 2015 March for life. It encourages the French to denounce the legislative evolutions which are causing their society to slide gently towards euthanasia. Protecting an unwanted or disabled child before it is born implies the same logic and engages the same responsibilities as for protecting the life of elderly people who have reached the end of their life. Respecting, as a principle, that killing is prohibited is what founds society. Overriding this rule causes society to disappear and opens the doors to the arbitrary decisions of the strongest and to subjective barbaric practices.

The Federation is counting on the wonderful momentum observed in France to awaken the consciousness of the citizens that has long been put to sleep by years of individualistic, materialistic and libertarian propaganda which has led to millions of abortions, to thousands of psychologically distressed women, to the emergence of a selective form of medicine that gets rid of the weakest –foetuses and people who have come to end of their lives-, to a form of research that freezes and sacrifices human embryos, and to politicians who encourage the procreation industry to have recourse to medically assisted procreation and gestational surrogacy. The Federation is calling upon the national and European political leaders to listen to the voices of all those who support the project of a society drawn by solidarity and the respect of human beings, may they be weak or strong, disabled or valid, foetuses or elderly people who has reached the end of their life. Indeed, they are being asked to listen to these people who want to rebuild democracy according to the values of the respect of life, first common good of humanity.

The crisis that Europe is going through, in particular concerning its economic and environmental state, are, first of all, moral crisis.

On January 25th in Paris, the ONE OF US European Federation is inviting everyone to make theirs the message Pope Francis – as a moral authority – delivered to the European Parliament concerning the respect of human life, which has been damaged by our “throwaway culture” : “ There is a risk for human beings to be reduced to a simple chain in motion which treats them as simple consumer goods to be used, and then, when their life is no longer useful to the good functioning of the mechanism they are got rid of without too many scruples, as is the case with terminal patients, elderly people left abandoned without any care, or children who are killed before birth.” January 25th should bring together a great number of demonstrators because what is at stake is simple, essential, and universal. On meeting with doctors, this is how the same moral authority put it: “Abortion is not a religious issue. It is a scientific one. We are speaking of a human life and it is not licit to kill a human life to resolve an issue. In the ancient way of thinking as well as in the modern one, the word kill has the same meaning.

This is also valid for euthanasia.” In Paris, the March for life will catalyse the vital forces which animates France and Europe in order to rebuild a European society focussed on men; all men, from their conception to their natural death.