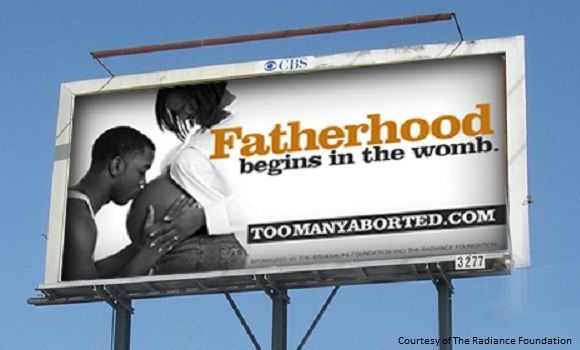 HAMPTON ROADS, Va. /Christian Newswire/ — The Radiance Foundation, in partnership with the Virginia Coalition for Life, has launched a wide-scaleTooManyAborted.com billboard campaign in Hampton Roads, Virginia, with the messaging: “Fatherhood Begins in the Womb.” Twenty billboards and over one hundred bus and light rail posters have been placed throughout the region to raise awareness of the impact of fatherlessness on (born and unborn) children. The pro-family, pro-adoption initiative challenges the culture of abandonment and death that Roe v. Wade has fostered since 1973.

In the early 60s politicians raised the alarm about a 25% fatherlessness rate in the black community. Today, 41% of all U.S. children are born to unmarried women: 35.7% of white children and an astounding 72.3% of black children. Children who grow up in single female-led homes are 5 times more likely to live in poverty. Out of the 1.21 million annual U.S. abortions, 84% are among unmarried women. This is a nationwide crisis. Abortion and poverty have taken the place of fathers.

Infant mortality is nearly 2 times higher among father absent homes. Yet Planned Parenthood of Southeast Virginia (PPSEV) distorted black infant mortality rates to get approval from the Virginia Department of Health for an expansion to their Virginia Beach abortion center. The request was publicly rejected, then approved behind closed doors. PPSEV falsely claims their new medical addition will be used mostly for “urinary incontinence procedures.” Ryan Bomberger, Chief Creative Officer of The Radiance Foundation, points out the absurdity: “Planned Parenthood isn’t in the business of doing ‘urinary incontinence procedures’. Abortion is what they do. Using 43 black infant deaths to justify causing more deaths is despicable.”

Bomberger, who is black, is an adoptee, adoptive father and Emmy® award-winning creative professional. “We need efforts that uplift the family, encourage responsibility and actually reduce the unintended pregnancy rate. Planned Parenthood has grossly failed at this core Title-X function by not budging the national unintended pregnancy rate since 1995, despite receiving half a billion taxpayer dollars annually.”

Star Parker, syndicated columnist and President of C.U.R.E. (Center for Urban Renewal & Education), adds: “Planned Parenthood has injected its venom into urban America for decades. TooManyAborted.com exposes how they’ve left our inner-cities fatherless and made abortion the number one killer of black Americans.”