You are here:
AbortionBioethicsEuthanasiaNewsOne of UsPress Release 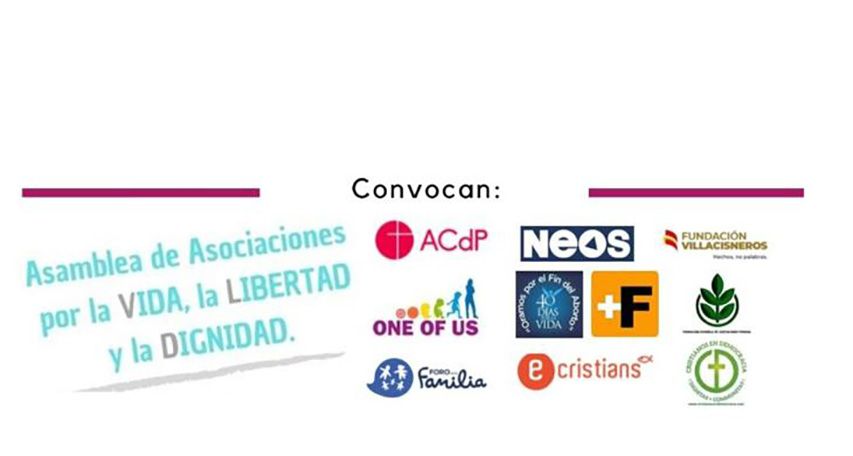 Madrid, February 3, 2022. The Assembly of Associations for Life, Dignity and

Liberty, the European Federation One of Us together with other organizations, has denounced this Thursday in the Senate the unconstitutionality of the Organic Law proposal that the Government is already preparing to penalize Pro-Life groups holding prayer days versus abortion clinics.

The aforementioned Assembly, made up of more than 140 associations from different areas of civil society together with the convening organizations, have reminded the senators that “the crimes of harassment and coercion are already classified as criminal offences”, for which reason this proposal of law is one more clear example of copyright criminal law, with an authoritarian-totalitarian conception, a fact that makes the proposal “raise serious doubts about its constitutionality and legality.”

The session featured the initial intervention of Jaime Mayor Oreja, spokesperson for the associations that make up the Assembly and representative of Neos, who began with a few words of thanks to the senators for “facilitating us to enter their homes to address such a transcendental for our society as is the defense of life». «We feel obliged to stop this decadence disguised as false freedom and progress that is trying to impose itself today in our country. Civil society cannot allow its fundamental rights to be censored under a clearly ideological and partisan criterion », he assured.

“They have no ethical, democratic or even legislative limits, since modifying the Criminal Code to limit our freedom of expression shows an unhealthy obsession with building a new social order.

The event was attended by senators Javier Puente (Popular Party) and Jacobo González-Robatto (VOX). Puente has assured that “a society that defends abortion as a conquest is doomed to failure” and that it “must be capable of

offer the adequate means so that a woman can carry her baby forward”. “We will fight against this law that suppresses our freedom of expression and opinion and imposes prison sentences for those who do not think like them. I’d rather be in jail than in silence.” he has finished.

By his side, González-Robatto has vindicated the figure of the human being “from conception”, a moment “undeniable from the scientific point of view and where one is most vulnerable, for this reason we are obliged to protect them.” The senator has assured that the culture of life is “the most important in our society” and has shown his support for those who “give hope”, referring to Pro-life groups. In this sense, he has warned that “in a hundred years, we will see abortion as we see slavery today” and it will be “a shame for our society.”

The senators of both political formations have assured that “we are all on the same team when it comes to defending life” and “against those who” attack such a fundamental pillar for our society as the family.

The protest takes place after presenting the proposal of the Organic Law, by which the Organic Law 10/1995, of November 23, of the Penal Code, destined to penalize the prayer in front of the abortion clinics, is modified. In response, the Assembly has alluded that “this action is protected by the fundamental rights of assembly and demonstration (art. 21 CE), participation (art. 23.1 CE), ideological and religious freedom (art. 16 CE), expression and dissemination of thoughts, ideas, opinions (art. 20.1.a CE), keys in any democratic system».

Jesús Poveda de Agustín, founder of the School of Rescuers, pointed out during his speech in the Senate that «the right to information is a priority in health matters. Before a surgical intervention such as an induced abortion, the woman must be informed. Poveda de Agustín, who also has more than 30 years of clinical experience, has pointed out that “denying the right to people outside the abortion business, like us, to report on this practice is allowing abortion to become a business where is trafficked with the health of the mother and her children. The doctor has concluded his intervention by assuring that “pregnant women are vulnerable during the gestation period and our work in informing them in that state means providing one last chance.”

In the words of Marta Velarde Mayol, from the More Future pro-life association, “women who have suffered this ordeal in the first person ask us every day where we were when they made the terrible decision to abort. They even confess to us that they would not have done it if we had been there. Velarde has highlighted that her association has hundreds of volunteers (around 70% made up of young people) who have rescued more than 6,000 babies since its foundation. “Today we take another step, with them in our memory, to ensure that we are not prevented from continuing to save lives.”

The spokespersons of both associations have agreed that the Pro-life concentrations “are protected by the right to demonstrate and it is also a sign of the freedom of expression recognized in our Constitution, something inextricably linked to political pluralism,” they concluded.

The act also included the testimony of two women who found in the Pro-Life associations a change in their way of thinking, refusing to be part of the abortion business. “They were our refuge during the most difficult moments. Being here now defending the right to life is our way of thanking you for being able to live today with our children, the most precious thing we have.” Both have assured that “some politicians intend to put those who help women like us in jail without taking into account that, when you abort, life is never the same again.”

For all these reasons, the Assembly has announced that it is willing to encourage the presentation of an appeal of unconstitutionality by the competent authorities in case the new regulation is finally approved.

The convening organizations regret that the political strategy steals the social debate when this Law attacks fundamental rights and freedoms. “We talk about people, not businesses,” they stressed in their speech.

Link to the document ‘Observations on the organic law proposal amending organic law 10/1995, of November 23, of the penal code, to penalize harassment of women who attend clinics for the voluntary interruption of pregnancy’ :