Fertility against climate change, the false dilemma of Germany 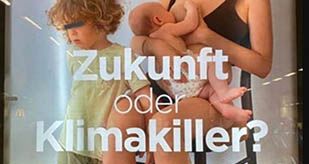 In Germany a campaign has started where they present having children as an attack against the climate and the environment. The new left coalition government made up of social democrats, greens and liberals (red, green and yellow and for that reason called the traffic light government) is gradually introducing new anti-family and directly anti-natalist policies very contrary to what they had usually fomented the previous German governments, formed by Christian Democrats and Social Democrats.

There are already legal changes that make it easier to publicize in favor of abortion, or expand the family union to the point where you can include a friend or the neighbor. The latest thing that is happening is presenting procreation, having children, as an attack against the climate and the environment.
In Germany there is, up to the present, a firm policy in favor of the birth rate with different social measures and particularly the so-called Kindergeld (“money per child”), a direct aid to families by the German Federal State for each child that they have. . Parents, families with children, charge a monthly amount for each child as a social measure to encourage the birth rate. A very good measure, by the way, that in Spain has never been seriously considered.

But now a contrary approach is spreading, negative towards life and hostile to the birth rate. It is nothing new, since the old «Gnosis» was characterized by the «hatred of the flesh» that occurred, very frequently, among those Gnostic sects that spread between the II-III centuries infiltrated among the Christian communities that grew throughout length and breadth of the Roman Empire.

That was a strange form (then parasitic on that Christianity in creation and expansion) that will be the origin of all subsequent ideologies, always maintaining the same permanent component: contempt for the real human being, the man or woman of “flesh and bone”. Since that time there have been many movements that have promoted «anti-natalism» and thus its «anti-humanism»: considering the propagation of the human species as an evil in itself.
From the old Gnosis to the Cathars and Albigensians of the twelfth and thirteenth centuries or the spiritualist movements of the fourteenth century until, later, in modern times, the Freemasons, Rosicrucians and other lodges and esoteric sects that have shared the same hatred for the extension of the human species.
The forms changed from German Idealism and the French Revolution in what has been called ideologies, finding in the totalitarian ideologies of the 20th century its purest and most destructive form: contempt for human life reached extreme limits.
” The hatred of the human”, “the hatred of the flesh” a practical manifestation of the old gnosis and recycling of «ideologies» returns through the new left: neofeminism, genderism, climatism, environmentalism, animalism, indigenism, etc. They are the most powerful «isms» or «neo-ideologies». Separately or in combination with each other. They seek the truth in the conflict and always define an absolute enemy to annihilate in the other.
In Germany, the theoretical source of this hypothesis, beyond the classic antinatalists and eugenicists of the pre-Nazi era, has been put, in a nice and postmodern version, by a teacher from Regensburg, Verena Brunschweiger (Passau, 1980), who in 2019 unleashed waves of indignation (or what is called here a “Shitstorm” –shitstorm–) with his book Kinderfrei statt kinderlos, (Free of children instead of without children), an anti-natalist text and a play on words that defends thesis like these: “Children are the worst thing that can be done to the environment”; “Children are the biggest climate killers of all and therefore a life without children is the only rational, ethical and morally justifiable way out of the climate misery the world is heading towards.”
She applies examples such as the expense of soaps and other hygiene products, food, diapers and other waste caused by human babies for a long time to justify the damage they cause to the environment. After the success of this first work a year later, the Brunschweiger, published another more radical Die Childfree-Rebellion (The rebellion without children with the subtitle: «Too radical is radical enough», from 2020) where he called on women to do a childbirth strike and affirms that people free of children, especially women, have better sexual relations and better human relations, insisting and deepening his previous thesis on the harmful effects of children, especially influencing the climate since he says: «by each child we do not give birth to saves 58.6 tons of CO2 per year”, a decisive factor for the author.
This depiction of reproductive human beings as provocative and crazy has been greatly promoted and argues that anyone who ignores the climate crisis or the pandemic situation with the coronavirus and deliberately helps bring children to this broken world, a world “groaning and suffers full of exploited masses and injustices» does not deserve any recognition, nor any help or reward.
All of this grossly recycles what Gnostics, spiritualists of all stripes, ideologues, eugenicists, totalitarians and, more recently, existentialists exhibited as their practical resolution: absolute disregard for human bodily life. Now, we enter a, allow me the term, superior “egoistic”: the Greens and the new left are leading us to the same thing, prioritizing environmental protection or animal welfare over humanity itself.
A clear symptom of the borderline personality disorder that our culture of death suffers from: a prolonged pattern of turbulent and unstable emotions where, culturally and morally, destructive behaviors, tendencies to harm oneself, recurrent thoughts of suicide and feelings of suicide stand out. chronic emptiness directed at the self-cancellation or suicide of the species.
Read more.
Categories: Abortion, News, ScienceFebruary 24, 2022
Share this post
Share on FacebookShare on Facebook TweetShare on Twitter Share on WhatsAppShare on WhatsApp