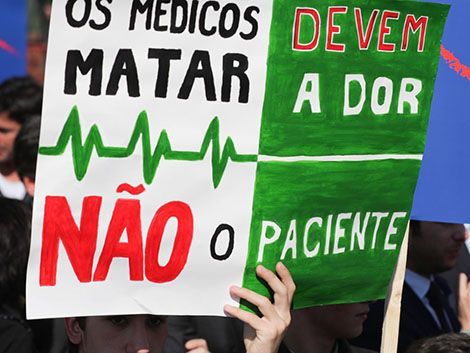 Last 20th February five proposals of law introducing euthanasia in Portugal where approved at the Portuguese parliament.
Some days before (the 7th February) the Federation Pela Vida launched a campaign against euthanasia and for a referendum. After the above referred vote the proposals of law were sent to a parliamentary commission in order to open the debate on article by article
The collection of signatures for the referendum petition collected by the 7th of March  74 thousand (the minimum is 60 thousand in order to demand the parliament to vote on a referendum [approving or not]) . By the  13th March the portuguese commenced the confinement due to the CoVid 19 as everybody in the world. At that moment 86 thousand of signatures that day were collected
Immediately at the end of the confinement the parliament announced they would open the debate again.  The petition for a referendum was finally presented the last 18th of June and rendered 95 thousand signatures
On Monday 21st a declaration has been launched from 15 of the more important university teachers of public law in Portugal advising that the proposals of euthanasia are unconstitutional. The Doctors Bar ( organ that in Portugal has powers to regulate the profession by delegation of the government) advised the parliament that if this law is approved they will oppose the constitutional right of resistance and so no doctor will be appointed to the commissions that are supposed to decide on each case of euthanasia.
The result has been that the Portuguese parliament declared that there will not happen a vote before August and the debate (and the hearings that they were intending to avoid) will be prolonged at least until September or October.
Organizations mobilized against this law will keep on campaigning and at the same time accompanying the parliamentary debate and going back to the streets.

Here in you will find the joint declaration on page two of the attached file (the first page is the letter that was addressed to the president of the Portuguese parliament sending the document).

These teachers are 15 from universities in Portugal, of 21 that comprises all the teachers on public law that hold the cathedra at their universities. It is highly representative of the academic thinking on the constitutional law (one of the signatories,  Dr. Prof. Jorge Miranda, is in fact known in Portugal as “the father of the Portuguese constitution” as he was the dominant figure, as parliamentary, when the actual democratic constitution was redacted in 1976) and an important contribution to the constitutional debate and verification at the respective court that will follow the approval of the law, if the same passes on parliament