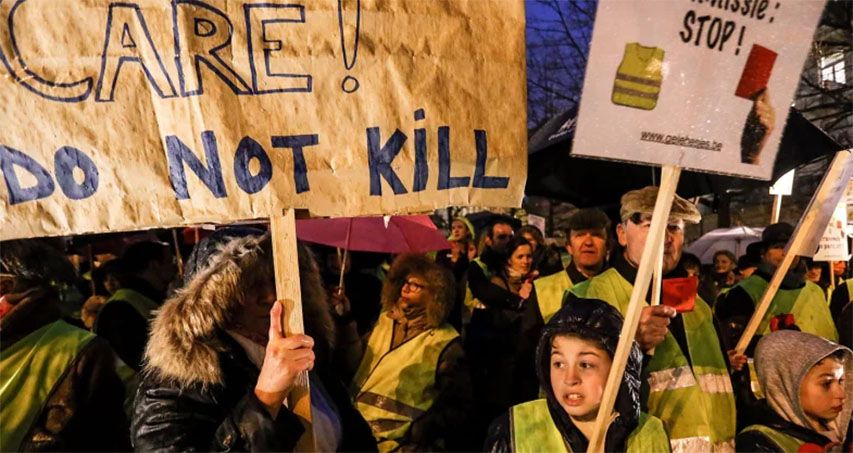 According to the data offered by the Belgian authorities themselves, more than 27,000 people have died from euthanasia in these 20 years in this European country that currently has 11 million inhabitants. This number of dead people is equivalent to entire towns some countries

Evolution of euthanasia in Belgium:

The cases of euthanasia in Belgium have been growing every year, except in the midst of the Covid-19 pandemic in 2020 with the countries unemployed and the health systems practically focused on the fight against the virus.

The idea that death must be close is less and less important in Belgium. In 16% of cases, death “was not foreseeable in the near future.” Michael Cook recently recalled that the 2002 Belgian law does not allow euthanasia for “being tired of life” or just because of age. The press release of the euthanasia commission insists on how much this norm is respected. However, doctors can and do get around the law by declaring polypathology (nearly all elderly suffer from various ailments) as reason enough for euthanasia.

For its part, the Alliance Defendig Freedom (ADF), an international group that fights for life and the family, wanted to emphasize for this event that the number of euthanasias in Belgium has gone from 234 lives in 2003 to 7 lives taken at day in 2021.

This organization also denounces this slippery slope, reporting that although euthanasia in Belgium was initially legalized under “strict conditions”, updates to the law have made Belgium the first and only country that allows euthanasia for children without legal requirements. age. There are also patients who have been “sacrificed” by psychiatric conditions, including depression.

“A just society cares about the most vulnerable. International law protects everyone’s inherent right to life. It requires countries to protect the inherent dignity and lives of all people, rather than help end them,” says Jean-Paul Van De Walle, legal counsel for ADF International in Brussels, Belgium.

“Sadly, over the years in Belgium, we have seen far too many people end their lives instead of receiving the care and support they need to live. In a very moving case, the only one so far to have come before a criminal court, the life of a 38-year-old woman diagnosed with autism, Tine Nys, was tragically ended by euthanasia due to mental health issues. Without a doubt, these vulnerable groups deserve better care and support to live”, adds Van De Walle.

The Belgian law, in the European Court of Human Rights

At the moment the euthanasia law in Belgium has been taken to the European Court of Human Rights by Tom Mortier. His mother was euthanized in 2012, at the age of 64. Without any prior consultation, Tom Mortier was informed a day after her death, with the explanation that he had been suffering from “untreatable depression”.”The big problem in our society is that we have apparently lost the sense of caring for each other,”denounced Tom Mortier. The Belgian law specifies that the person must be in a “medical condition of constant and unbearable physical or mental suffering that cannot be alleviated, as a result of a serious and incurable disorder caused by illness or accident”. Mortier’s mother was in good physical health and the psychiatrist who treated her for more than 20 years expressed her doubts as to whether she met the requirements of the Belgian euthanasia law. However, she was euthanized by another doctor.

Tim Mortier denounces that his mother, with psychiatric problems, was euthanized without informing him or his siblings.

“My mother had a severe mental problem. She had to deal with depression throughout her life. She was treated for years by psychiatrists and finally contact between us was broken. A year later she received a lethal injection. Neither the oncologist who administered the injection nor the hospital informed me or any of my siblings that our mother was even considering euthanasia,” he states.

Euthanasia in Belgium, a normal practice?

The defenders of euthanasia try to argue over and over again that this practice is “a care like another”, but even in their own argument they show their own inconsistencies.Marc Decroly is a general medicine and emergency medicine doctor who has performed more than 100 euthanasias in his career, and in an interview with France 24 for the twenty years of the Belgian law he reveals this contradiction.

“Euthanasia is care like any other, the difference is that it is a final care”, affirms this euthanasia practitioner, who from emotivism affirms that the final moment between the person who is going to die and his family is special, the same as for the medical. “It is extremely rich in human terms. We perceive all these emotions, they make us grow, they make us progress, we make ourselves a little better”, he assures.

However, a few moments later, Decroly states that he is not capable of performing many euthanasias, that “beyond three a month it becomes hard”. So, is euthanasia care like any other or isn’t it? If it were just another medical procedure, I would have no problem doing one or more a day, or several a week. But the reality is that even if they try to hide it or deceive themselves, doctors who perform euthanasia know that they are taking a life, a life that could continue its course with dignity with the necessary care.

A drift that scares even its defenders

Is the debate on euthanasia a closed issue? As happens with abortion, when laws are approved and already have a trajectory, an attempt is made to impose the idea that it is something assimilated by society and that there is no possibility of going back.But the reality about euthanasia in Belgium is that it is not a debate that has ended but rather that important gaps have been opened in these years even among those who supported the law.

The abuses, the lack of control and the huge slippery slope frighten many who were staunch supporters of euthanasia. Where is the limit?, they wonder.

An example is that of the neurologist Ludo Vanopdenbosch, who resigned from his position in Belgium as a member of the Federal Commission for the Control and Evaluation of Euthanasia. “I do not want to be part of a committee that deliberately violates the law,” he argued in a letter. This doctor, who is not opposed to euthanasia, denounced that the Commission did not want to refer to the authorities the case of a doctor who, at the request of the family, had applied euthanasia without consent to a patient with dementia who had not manifested that will before his illness.

“That’s not euthanasia because the patient didn’t ask for it, so he’s deliberately taking a life. I know of no other word than ‘murder’ to describe this,” said Dr. An Haeken, Director of Psychiatry at Alexianen Psychiatric Hospital in Tengo, Belgium.

There are many testimonies from families who denounce how they have killed a loved one or from doctors and health professionals who cry out about what is happening.

One of them is Eric Vermeer, professor of nursing, psychotherapist and specialist in palliative care and psychiatry.

This Belgian professional spoke of the number of euthanasias that are not declared in the country, which would considerably increase the number of victims. Eric Vermeer says that nobody is surprised: “it is accompanied by strong emotions and decisions that are often made in the heat of the moment. Five years ago, a doctor even said in the Senate that it had been a long time since he had declared euthanasia and that he had not called another colleague to validate the euthanasia request as stipulated by law”.

Euthanasia in Belgium was originally sold as a “last resort” for terminal conditions and unbearable pain, but now it is used for everything and doctors and even nurses propose it to vulnerable and depressed people with great lightness. If a patient tells his emotional or family sorrows to a health worker, they may immediately tell him “ask for euthanasia”.

– A lady with serious cancer, but she is still a long way from death; she complains about her alcoholic husband and her daughters in their twenties not visiting her. The attending physician asks her: “Given her health and her family situation, does she not believe that euthanasia could be the least bad solution?”– A divorcee with chronic depression has attempted suicide three times; the psychiatric nurse, when she arrives at the hospital after her last suicide attempt, tells her “does she know that she can request euthanasia?”; The depressed suicidal woman asks the nurse for more information and she gives her the details of an association for the promotion of euthanasia.

– An elderly woman has been cared for in a residence for years; a stroke has just left her speechless, although she is aware of it; An assistant of hers, in an evaluation meeting of the team that takes care of her, comments naturally: “can’t we propose euthanasia to this woman? She is greatly diminished after that attack.”

A devastating study on the application of Euthanasia in Belgium

For its part, five years ago the University of Cambridge published an important multidisciplinary study on the application of euthanasia in Belgium and its impact on society. Already then the trajectory of euthanasia reached fifteen years, enough time to analyze this regulation.The work is titled Euthanasia and Assisted Suicide. Lessons from Belgium [Euthanasia and assisted suicide. The lesson of Belgium] The researchers’ conclusions were already resounding:

–The system is not transparent: “Can a commission of 16 members who do not work full time give serious consideration to all the reports, especially now that there are several thousand a year?”, the researchers ask.

–The system is self-referential: “It depends completely on the information sent by the same doctor who performed the euthanasia”. Consequently, “according to independent research, only 50% of euthanasia cases are reported, and the cases that are not reported are the most ethically and legally problematic.” Hence, “of the thousands of cases that have been reported to the commission, only one was referred to the prosecution” for possible breach of the law.

-Cases of euthanasia without the patient’s request have multiplied since legalization in 2002.

–The use of deep sedation as covert euthanasia has skyrocketed: “In 20% of cases, general practitioners who prescribed continuous deep sedation had the intention, exclusively or not, of shortening the life” of the patient.