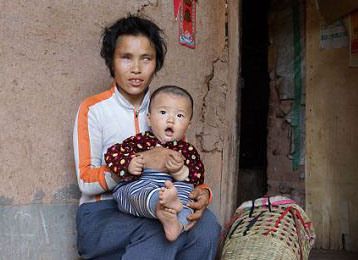 For many Chinese women, keeping a daughter is a battle—and the stakes are unthinkably high.

A Chinese woman may not become pregnant without the government’s permission. Under China’s One-Child Policy, all couples must apply for a birth permit before starting a pregnancy. Nearly two-thirds of Chinese couples (more than 900 million people) may have only one child and will be issued only one birth permit in their lives. Pregnancy without a permit is illegal.

If an illegal pregnancy is discovered, the mother has two choices: abort the baby or pay an unbearable fine. Chinese data show that 13 million abortions are performed each year. Many of these abortions are performed on women who simply can’t afford to stay pregnant. In Shanghai, where penalties are highest, the fine for an illegal pregnancy equals 25.8 years of average annual rural income.

A Chinese baby girl who escapes abortion is still in grave danger. Parents who desperately want sons and can’t afford the fine for a second child sometimes discard their baby girl when her gender is discovered at birth. In China, girls are twice as likely to die in their first year of life as boys.

Poverty makes a huge impact on a mother’s decision to keep her daughter. In fact, the death rate of girls in their first year of life is up to three times higher in rural, poorer areas than in urban, wealthier areas. Many poor Chinese families feel that they simply cannot afford a girl.

Chinese girls who manage to escape infanticide are often abandoned. The Chinese government’s lack of transparency makes it difficult to know exactly how many girls are abandoned each year. However, we do know that fewer than half of China’s orphans receive government subsidies and abandoned children are highly vulnerable to human trafficking.

Yet mothers who refuse to abort or kill their baby girl often feel that abandonment is their daughter’s only hope. Illegally born girls who stay with their parents still face tremendous obstacles. Without a birth permit, a girl’s parents cannot provide her with a hukou, the registration which gives Chinese citizens access to education, healthcare, marriage and even public transportation. Accepting such a fate for her child is an impossible thought for many Chinese mothers.

Together, these heartbreaking obstacles to life—abortion, infanticide, poverty, abandonment and government red tape—produce a devastating reality: China had 40 million more males than females in 2012. Millions of girls have simply disappeared.

In China today, each daughter who stays with her mother is a miracle. Each mother who chooses to keep her daughter is a warrior. But warriors cannot fight alone. At All Girls Allowed, we go where need is greatest, spreading hope and life to mothers who face the unthinkable choice of whether to keep their daughters. Each baby girl who lives is one more tiny step toward freedom and justice for women and girls in China.