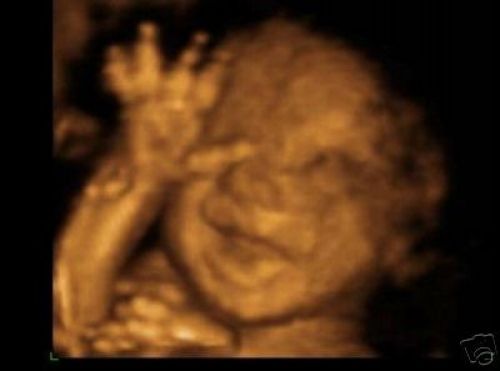 In the fall of 2011, science writer Annie Murphy Paul gave a lecture at a Technology, Entertainment, Design (TED) conference in Edinburgh, Scotland that demonstrates with moving clarity that the unborn child is a person, capable of cognition and emotion from its very early stages.

Based on her book Origins, Murphy explains that the child in the womb absorbs all kinds of information that affects his or her life once born. Here are some excerpts:

First of all, they learn the sound of their mothers’ voices … And because the fetus is with her all the time, it hears her voice a lot. Once the baby’s born, it recognizes her voice and it prefers listening to her voice over anyone else’s …From the moment of birth, the baby responds most to the voice of the person who is most likely to care for it — its mother. It even makes its cries sound like the mother’s language, which may further endear the baby to the mother, and which may give the baby a head start in the critical task of learning how to understand and speak its native language.

But it’s not just sounds that fetuses are learning about in utero. It’s also tastes and smells. By seven months of gestation, the fetus’ taste buds are fully developed, and its olfactory receptors, which allow it to smell, are functioning … They’re being introduced to the characteristic flavors and spices of their culture’s cuisine even before birth.

The baby’s mother has a profound bearing on the life of her child, biochemical but much more:

Much of what a pregnant woman encounters in her daily life — the air she breathes, the food and drink she consumes, the chemicals she’s exposed to, even the emotions she feels — are shared in some fashion with her fetus. They make up a mix of influences as individual and idiosyncratic as the woman herself. The fetus incorporates these offerings into its own body, makes them part of its flesh and blood. And often it does something more. It treats these maternal contributions as information, as what I like to call biological postcards from the world outside …The pregnant woman’s diet and stress level in particular provide important clues to prevailing conditions like a finger lifted to the wind. The resulting tuning and tweaking of a fetus’ brain and other organs are part of what give us humans our enormous flexibility, our ability to thrive in a huge variety of environments, from the country to the city, from the tundra to the desert.

Ms. Paul inexplicably insists on calling the unborn baby “the fetus;” if he or she is not a baby, who cares what a “fetus” does and doesn’t know?  Regardless, she has done a tremendous service to all who care about the sanctity of unborn life.

“We are fearfully and wonderfully made,” writes the Psalmist, made in God’s image and likeness.  Doubt it?  Watch Annie Murphy Paul’s lecture and share in the spontaneous, humble joy that accompany the miracles of conception and birth.

LifeNews.com: Rob Schwarzwalder is with the Family Research Council.