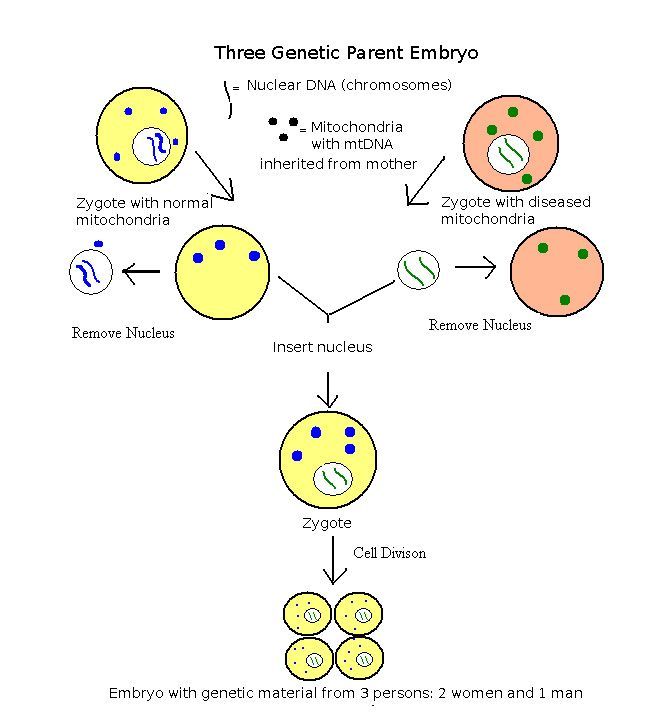 It is important to note that this science is very new. Last week we talked about traditional IVF still being a vast experiment after 35 years. This science is still quite in its embryonic stages (pardon the pun). There are a few different techniques for manufacturing “three-parent embryos.” The one being developed at Britain’s Newcastle University is known as pronuclear transfer (PNT) and swaps DNA between two fertilized human eggs. The first time this technique was successfully used to make human embryos was just two years ago.

So, on top of the fact that, life IVF, the creation of new human life in this way is immoral in and of itself, there is no telling what kind of effect this will have on the children it produces. Indeed, there is a good possibility that we may simply be trading mitochondrial disease for other abnormalities if babies are ever born using this technique.

And that’s a big if.

In Newcastle’s initial report most of the embryos were so mangled in the reprogramming process itself that they couldn’t even start dividing. In order to get better results, more research must be done, which means more and more tiny human lives lost and destroyed. Even if the technique is somehow perfected, though, the destruction of life will continue. Recall that for every 3-parent embryo made in the process of PNT, two other embryos must be created and destroyed.

It is also worth noting that this does not doesn’t cure mitochondrial disease or prevent its inheritance. Much like PGD, it simply makes sure no embryo with defective mitochondria are born.

For more on this, check out episode three of BioTalk in which Rebecca Taylor and I discuss in more detail the long-term implications of germ line modification and the “Brave New” United States where there are no restrictions on this or other once unthinkable kinds of human experimentation currently in practice. We also talk about the impact this kind of experimentation has on women. Ladies, pay attention. Human Biotechnology is a “women’s issue” if ever there was one.

LifeNews.com Note: Chelsea Zimmerman is an associate editor for CatholicLane.com and often writes about life issues and Catholic spirituality. She blogs at ReflectionsofaParalytic.com.