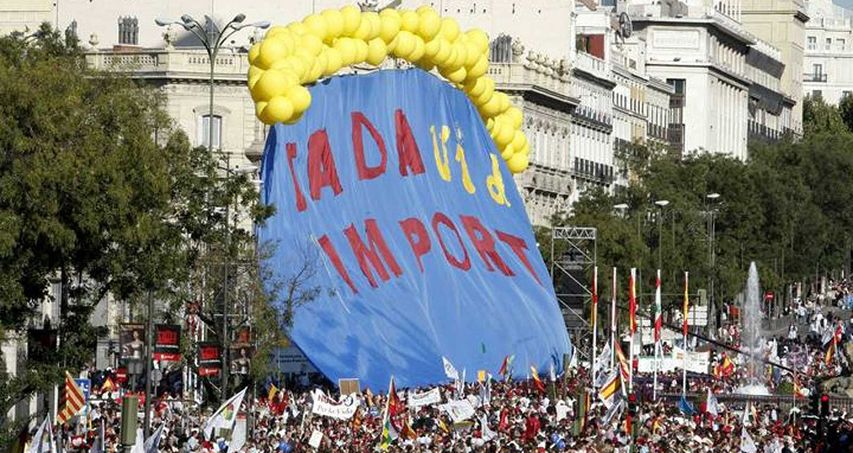 The rights to freedom of expression, peaceful assembly and association guarantee and protect various forms – individual and collective – of publicly expressing opinions, dissent, demanding compliance with social and cultural rights and affirming the identity of groups.

The new proposal of the Spanish Government Law to penalize the Provida groups, far from presenting a consensus view regarding the protection of demonstrations and protests, represents a clear limitation of the exercise of these rights in public space, the product of a conception that considers this citizen mobilization as a form of alteration of the dominant pro-abortion lobby with regard to the Defense of the Life of the Unborn.

The State also has its own obligations that must be aimed at guaranteeing, protecting and facilitating protests and public demonstrations, as well as the standards that must frame the progressive use – and as a last resort – of force in protest contexts. One of its functions of demonstrations and concentrations is to channel and amplify the demands, aspirations and claims of population groups, including sectors that, due to their situation of exclusion or vulnerability, do not easily access the media and the institutions. traditional mediation.

From One of Us we express our firm opposition to this Law that supposes the infringement of the rights that assist to all citizens and the State has the obligation to respect. One of Us Federation denounces that this new attack on fundamental rights has an ideological purpose: the defense of abortion, but also a political one to protect the pro-abortion lobbies and the companies that works on this business

One of Us Federation affirms that it is essential that the spanish Government and more over all the nations respect and guarantee that no one will be criminalized for exercising the rights to freedom of expression, assembly and association in the context of demonstrations and protests.
Categories: Aborto, Noticiasseptiembre 20, 2021
Share this post
Share on FacebookShare on Facebook TweetShare on Twitter Share on WhatsAppShare on WhatsApp