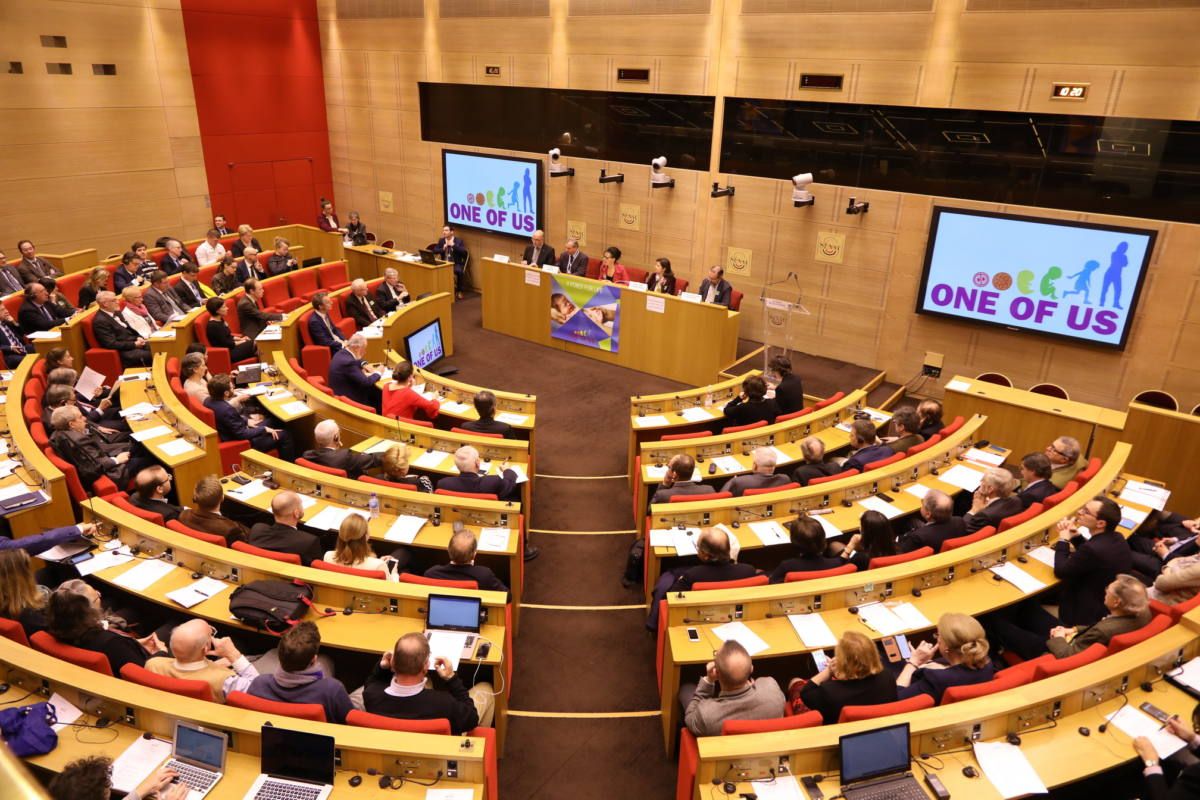 Symposium for the European cultural platform One of Us

I would like to briefly and frankly address a question to which Olivier Rey has pertinently and forcefully directed our attention, the question of size, or of dimension, the question of the measure of things.  He makes particular reference to the political.  What is the correct size, the correct measurement, the norm, in the city?  For a long time, it has been observed that the political system depends to a large extent on the size of the political body.  Until the 18th century, it was thought that a democracy could only survive in a small state.  The creation of a representative government enabled a democratic republic to be established in a larger state.  What is the situation today?

I seems clear to me that the “question of Europe” is today, however one looks at it, a question of size and dimension.  In summary; the imperative nature of the European structure derives from the fact that the European nations are today too small and, as such, too weak to face the new challenges of the world, and that only a united Europe will be big enough and strong enough to tackle the task we have ahead of us.  That said, what would the appropriate size of this greater Europe be?  What Europe will be large enough?  It seems we are unable to answer this question as the European Union never ceases to grow, as there are new candidates who wish to join and no one has proven capable of remaining in favour of what Pascal called the “great infinity”, or the infinity of greatness.  At the same time, these nations, which seem to us to be too small and weak, also seem too big and strong when compared to what Pascal called the “small infinity”, the infinity of smallness, as we never cease to desire a closer proximity and, even though Europe is never large enough, the community, at least in France, is never small enough for us.  So therefore, our imagination keeps coming and going between the small community and the immense Europe, not without however, marking a series of administrative stop offs, in France the communities of the towns, the departments, the regions, and beyond them are the nation and the different European circles, with their hard nuclei and their borders.  In short, today in Europe, nothing detains the volubility of our imagination which passes ceaselessly back and forth from the greatest extreme to the smallest, unable to stop.  It is impossible to exaggerate the exhaustion that this involuntary exercise causes us, just as we are unable to overestimate the degree of disorientation it causes.

It is not difficult to identify the cause of this strange illness that is attacking our imagination.  The nation, the nation which gave us measurement, the nation from which we conceived greatness and smallness, the nation which regulated our imagination, the nation, which through its authority, lost the capacity to perform this very function.  The nation acquired both this authority and this role over a long period of history, something which was never necessary.  Critiques are right when they say that nowhere is it written that the nation represents the political form with the correct dimensions to which we should always and could always return.  They are right, but we are also right to remind them that, although the nation is neither the natural nor the necessary way for political existence, we do need a form with a comparable authority to perform this necessary function of “measuring the world” for the social and political beings we are.   Contrary to the opinion, no less convincing than it is insistent, that this form cannot fit this Europe under construction as, and this is where I began, instead of finding the right size with Europe, we suffer together with her the “disproportionate” impulse of indefinite growth.

It is impossible that our collective imagination fully comprehends the gravity of the consequences this implies for both our practical and political capacities, and above all for our biased system.  European political life, as we know, is distributed and divided between two great yet opposing opinions, with the “Europeans” or “cosmopolitans” taking one side, and the “populists” or “nationalists” taking the other.  It is deplorable that this polarity makes certain compromises impossible which, until recently, other oppositions permitted.  We are right to complain about this situation, but if it is so impossible to overcome, it is due to both parties responding to two opposing movements of imagination which nothing can now come to mediatise.  It is because the nation is no longer the measure by which our political life is divided between nationalists and globalists or Europeans.  Let us take a closer look.

Should we allow ourselves to be carried along by the side of the “great infinity”, we will look further and further afield for the motives and reasons for our actions.  Where will we look for them?  Not, of course, in our nations, not even in Europe, whose outer limits are powerless to detain our imagination, but rather out in the “world” or in “humanity” which are the only things, in the eyes of those whose imagination looks towards that side, which possess any authority.  So, the “restrictions” of globalisation and the “values” of a borderless humanity, together with what we must do, revert back to us, and as we can only give credit and honour to that which is far from us, to that which is most disproportionate to us, our agenda is written for us externally.  If we let ourselves be carried along by the side supporting the “small infinity”, then the opposite happens.  We wish to look, closer, ever closer, for the motives and reasons for our actions.  But where?  “At home” of course.  But where exactly is that?  We suppose that we know, that “our house” is something clearly circumscribed.  This was true when imagination had dimensions, however, we allowed ourselves to be led, we no longer are “at home”, rather we flee from home or we take shelter at home, and why would we stay in the nation when our region is more intimate, and when in our region, we are even more “at home”?  What is more, why would we stay in the region? And what motives or reasoning do we actually find “at home”?  Our response; the preservation of our identity.  But identity involves no principle, it pursues no action.  Of the thousands of motives for taking action that have contributed to moulding our identity, which should we choose, which should we put into action?  Our Christian identity?  But then, the motive would not be our own identity, but that of the Christian faith.

We see it, this division of our imagination, this “disproportion” of our imagination, it has seriously disorganised our practical capabilities.  We are either seeking our motives too far afield, or we seek them too nearby.  “China” constitutes a large part of the world and humanity, and unquestionably our actions must bear this in mind.  However, “China” tells us nothing about the way in which we should compose our normal life.  The way in which “China” becomes an object or an occasion for our course of action depends on the form in which we, from our side, compose the motives of our actions in a moral and political community where China has no place, unless, of course, we do wish to associate it with our normal life, which is not the case.  Symmetrically, our identity as such is no motive for acting.  It is, and greatly so, a condition of our actions.  But let us be rid of this word which only feeds misunderstanding and confusion.  We cannot, and we will not seek our own motives and our own reasons for acting in the world or in humanity, we cannot nor do we wish to, seek them so far afield.  So, where then, will we find them if we are also unable to find them nearby or at home?

We will seek them, and we will find them just where they are, more precisely, in practical communities, active associations, be they laic or religious, and also in the political bodies to which we belong.  Our imagination bursts apart and on occasion lets itself be led by the side of the “great infinity”, on other occasions by that of the “small infinity”, at times taking the side of the world or of humanity, and at others taking that of identity.  But nothing obliges us to surrender to our imagination’s impulses, we cannot really live where we do not act, however, we do not act “in the world”, as it does not form a political community, and neither do we act simply “at home” as the “home” of practical life is always a group of more or less extensive associations which lead to us living , not in the place of the action, but rather for the result of the action.  Instead of aiming to act where we believe we live, which is always too far or too near, we again live where we act, we reinvest our torn and sick imagination in the communities of actions where we are interested parties.  Undoubtedly, the shape of the nation no longer fits our bill.   It continues to be, nevertheless, the most synthetic form of European life, and still offers a sufficiently ample frame, as long as it avoids the diminishment of identity which will only lead to paralysis.  As far as Europe is concerned, we should at last awaken the “European dream”, not in order to diminish our control and ambition, but to free ourselves from this bewitchment of indefinite expansion, to not lose ourselves in the vertigo created by limitlessness, the vertigo of borderless humanity.  Europe, however, is still our objective, not as a horizon moving ever further into the distance as we approach, but as the dynamic sum which results from collaboration between European nations.  It is time to gather together all that is acting between us in the proportion in which it is acting.

This imagination which leads us to live where we are not, has occupied too great a space in our lives.  What is important are the motives and reasons for our actions.  Wherever there are powerful and fruitful motives, the near and the far which cause our imagination to overflow, lose their power.  In a civil community, the members may be nearby or far afield, live far from or near to one another, just as townsfolk are neither near nor far, they share the same city, that is to say, the same common action.  In a religious community such as the Christian church, that missionaries go to the ends of the earth, that parishioners join together for services, that two or three “pray in his name”, or that the individual turns to The One, are the same principles when applied to a spiritual operation as those which unite the immense with the intimate.  Exposed as we are to two opposing temptations or vertigos, the extent of humanity on one hand, the withdrawal of identity on the other, we will only find mediation and dimension by abandoning the space where these two tendencies are opposed.  Political action on one hand, and Christian action on the other, when they are at least performed with enough integrity and sincerity, remove us from this imaginary life in which we tear ourselves apart so unnecessarily.

Dialogue with young people as the main protagonists of the choice to have children
octubre 18, 2022