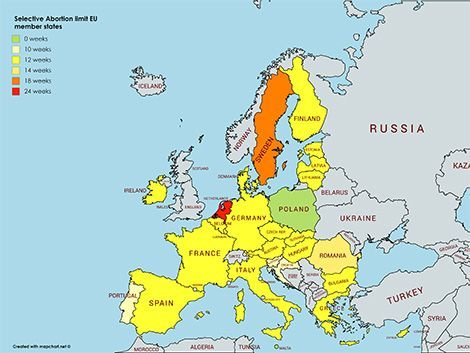 The colors on this map show how many weeks abortion is allowed in the countries within the European Union.

Abortion is not allowed in Malta and Poland. In Poland, exceptions apply for when the mother’s life is clearly in danger, after rape or incest. These countries are made green.

Abortion takes away the future of another human being, regardless of whether you are four weeks, twelve weeks or twenty four weeks pregnant. As a child before 24 weeks is removed from the uterus, it will die (if it hasn’t already been killed) because it cannot yet survive outside the womb. But this is simply because of how the unborn child is made. At the same time an adult person is not able to survive under water, because this person then drowns, while the unborn can survive just fine. So, why should age determine if we may end someone’s life?. The entire abortion debate revolves around the recognition of the dignity of unique human life. It is our demand and hope that the Netherlands is next to become a  «Green» country!