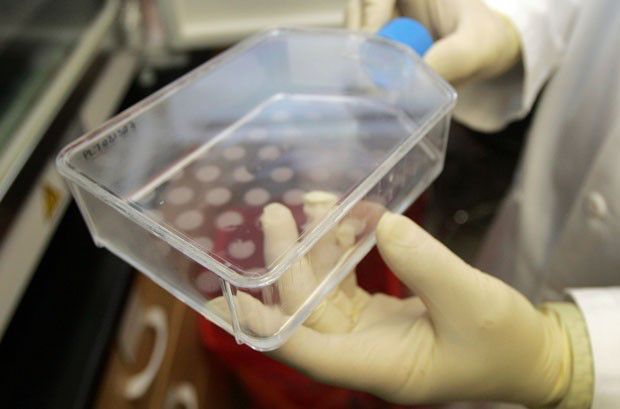 Stem cells from a tank in a lab in Athens, Ga. A California lab has discovered a way turn stem cells from bone marrow into brain cells.

Scientists have discovered an antibody that can turn stem cells from a patient’s bone marrow directly into brain cells, a potential breakthrough in the treatment of neurological diseases and injuries.

Richard Lerner, of the Scripps Research Institute in California, says that when a specific antibody is injected into stem cells from bone marrow—which normally turn into white blood cells—the cells can be triggered to turn into brain cells.

«There’s been a lot of research activity where people would like to repair brain and spinal cord injuries,» Lerner says. «With this method, you can go to a person’s own stem cells and turn them into brain cells that can repair nerve injuries.»

Antibodies are Y-shaped proteins that the immune system uses to help identify foreign threats to the body. They bind to foreign invaders in the body in order to alert white blood cells to attack harmful bacteria and viruses. There are millions of known antibodies.

Lerner and his team were working to find an antibody that would activate what is known as the GCSF receptor in bone marrow stem cells, in order to stimulate their growth. When they found one that worked, the researchers were surprised: Instead of inducing the stem cells to grow, they began to form into neural cells.

«The cells proliferated, but also started becoming long and thin and attaching to the bottom of the dish,» which is reminiscent of behavior of neural cells, Jia Xie, a research associate on Lerner’s team, said in a released statement. Further tests confirmed that they were neural progenitor cells, which are very similar to mature brain cells.

Lerner says that scientists have «an awful lot of experience injecting antibodies» into stem cells and that the process is not «inherently dangerous.» The team plans to start animal tests of the technology soon.

«We’re going to collaborate with people who are trying to regenerate nerves in the eye,» Lerner says. «We will team up with a couple people strong in that area of research.»