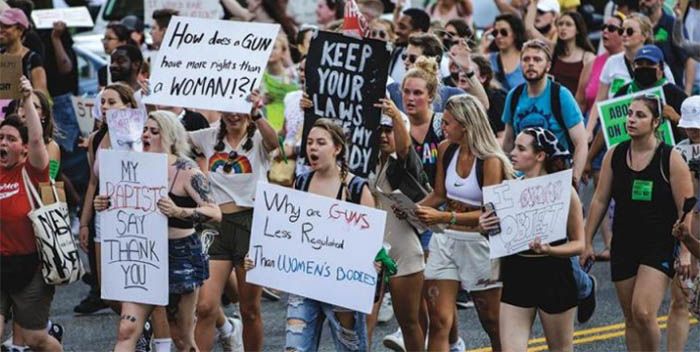 In 1973, the US Supreme Court in a controversial decision ruled that no state of the United States could absolutely prohibit abortion during the first six months of pregnancy. In practice, this created a fundamental right to abortion in the US within a certain time period, even though the constitution did not refer to the right to terminate a pregnancy in any way.

The US Supreme Court judges ruled that this was implicitly included in the right to privacy; there is a “zone of privacy” within which the state could not interfere. The pro-choice argument prevailed over the life of the unborn child.

On June 24, 2022, Roe vs Wade, after practically 50 years, has been reversed and overruled. This does not mean that abortion is outlawed in the United States. It means that the Supreme Court has left it up to each one of the 50 states of the US to decide on the abortion issue. Most southern states have started the process to ban abortion altogether; others will still allow it.

What was considered as a federal right is a right no more.

The matter has been left within the discretion of the 47 member states of the Council of Europe. The same attitude has prevailed in the European Union, where matters such as divorce, abortion and euthanasia have been left in the hands of the 27 members states according to the sacred principle of subsidiarity.

The development of the overruling of ‘Roe v. Wade’ brings to light the false assertion made by a group of pro-choice activists  who alleged in a judicial protest filed on June 15 that the absence in Malta of a law allowing for the termination of a pregnancy in Malta, namely the killing of an unborn child, amounts to a violation of three rights listed in the European Convention: the right to privacy, the right to protection from inhuman treatment and freedom from discrimination.

This is pure legal nonsense. The European Court, as has been said, has refused to condemn states which do not allow abortion. It is true that it has not struck down abortion laws but it has never ruled in favour  of a fundamental  human right to abortion.

The judicial protest does not refer to any single judgment of the European Court which forces member states to introduce abortion. The reason is simple, there are none.

Besides, arguing that not being allowed to terminate the life of an unborn child is “inhuman” provokes the question: inhuman for whom? If the reference is to the helpless and voiceless unborn child, I fully agree. The protest went a step further.

The proposers lament that the absence of abortion laws in Malta reduces and affects their “quality of life”. What they forgot to state is that, if abortion were to be introduced, the life of unborn children would not only be affected in their quality, their life would be extinguished altogether by a unilateral decision of the mother.

What is even more baffling is that the protest refers to several international treaties. None of them has been interpreted as allowing a right to abortion. Indeed, the American Convention on Human Rights recognises the right to life as a rule “from conception”.

What is even more puzzling is that, while the pro-choice activists brandished  their false argument that international law and treaties recognise abortion, they conveniently failed  to mention the judgment of the Maltese courts in the Persiano case,  in 2000, to the effect  that the unborn child enjoys civil and constitutional rights which cannot be breached; to the extent that the pregnant foreign mother of an unborn child, whose natural father was Maltese, was not deported from Malta since she was carrying a potential Maltese citizen  in her womb.

The argument is sometimes deceitfully put forward that Maltese law does not allow abortion, not even in cases where the life of the mother is at stake.

This is not true. But, as in Ireland, this argument is put forward to appeal to the emotions and worries of women. No person has ever been prosecuted in Malta because, as a result of a medical and surgical attempt to save the life of the mother, the unborn child dies because of such intervention.

No human being can be forced to die for the sake of another. Of course, if one gives up one’s life for another, in Maximilian Kolbe fashion, that is the greatest form of love. But no one has a legal obligation to do so. The argument that in Malta abortion is illegal to the point of risking the mother’s life is not legally correct. But it will be used again and again to persuade others to introduce abortion on demand. That is what happened in Ireland.

We should all strive to see to it that it does not happen in Malta.