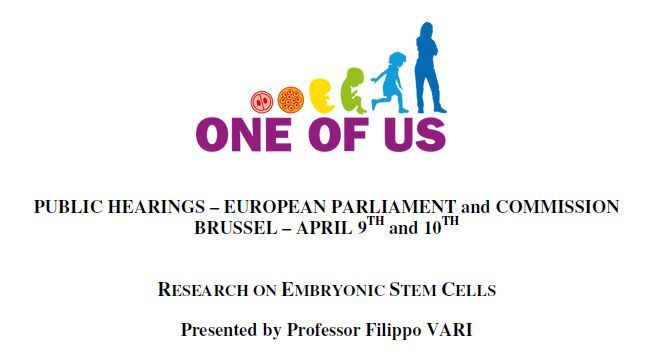 Our request is to ensure, through modifications of the EU’s Financial Regulation and the Regulation on FP 8 («Horizon 2020»), that the EU research budget is not used to finance research projects that involve or presuppose the destruction of human embryos.

A few weeks ago, when the success of our initiative was already known, Research Commissioner Máire Geoghegan-Quinn was asked by a journalist how the Commission was going to respond to it. Her response1 was that the Commission considered the existing ethical framework to be sufficient, pointing to a protocol that was adopted at the time when Framework Programme 7 was agreed, and which the Commission wants to leave completely unchanged. In other words, the Commissioner has openly declared that she did not want to follow-up on this initiative – even at a time when the validation of signatures was still going on, and a long time prior to today’s hearing.

We believe that this is not the way how the Commission should deal with the most successful ECI so far. From a purely political point of view, Mrs. Geoghegan-Quinn’s statement has shown a regrettable disrespect to European citizens. But the position she expressed is also unsatisfactory with regard to substance, and I will briefly discuss the protocol quoted by the Commissioner to illustrate why.

1.3. Why the existing framework is unsatisfactory

(1) The decision on the 7th Framework Programme explicitly excludes three fields of research from Communityfunding:

This is insufficient, because it deliberately omits to exclude research activities the pre-suppose the destruction of human embryos. It also fails to exclude the funding of activities intended to create human embryos not solely (but only partially?) for the purpose of research and/or stem cell procurement. In other words, this commitment has many loop-holes.

This statement is not only insufficient, but it is outright scurrilous and laughable. The Commission views it as an important ethical commitment that it will not finance activities that are forbidden in all Member States. Shall we applaud this important commitment? Shall we burst out in laughter? Or shall we weep? It is difficult to keep a straight face.

Similarly, the second part of this statement is not really a serious-minded ethical commitment. Did the Commission believe that, if it were not for this important protocol, it had the right to fund a promote activities that are prohibited in the Member State where they are carried out? Should we be grateful that it does not fund activities that are illegal? Are the limits set by criminal law the only point of reference for the Commission’s ethical standards?

But inversely, this statement means that an activity can qualify for EU funding if it is illegal in 27 out of 28 Member States – provided only that it is legal in the country where it is carried out. So, if one single country decides to legalize the creation of human-animal chimaera (which would  then arguably be something else than «human beings»), such an activity might be eligible for funding under Horizon 2020. This principle actually might open the way for an «ethical race to the bottom»: whatever ethical standards a Member State chooses to adopt might result in cutting that Member State off from benefiting from EU funds to which nevertheless its taxpayers must contribute. In other words: this principle sets out a premium for the countries with the lowest ethical standards.

It is obvious from these very few remarks, that the purpose of this protocol is not to set high ethical standards, but – on the contrary – to provide the appearance of legitimacy even to the most questionable activities.

(4) In calling for proposals, the European Commission does not explicitly solicit the use of human embryonic stem cells. The use of human stem cells, be they adult or embryonic, if any, depends on the judgement of the scientists in view of the objectives they want to achieve. (…)

(5) Each project proposing to use human embryonic stem cells must successfully pass a scientific evaluation during which the necessity of using such stem cells to achieve the scientific objectives is assessed by independent scientific experts.

In other words, the scientific community are to be their own judges, or their own ethical standard-setters. This sounds pretty much like saying: «the speed of the car depends on the judgement of the driver in view of when he wants to arrive at his destination». Or: «the driver should be as sober as he deems necessary». This text does not set or enforce any ethical standards. On the contrary, it is a declaration of abdication.

(6) Proposals which successfully pass the scientific evaluation are then subject to a stringent ethical review organised by the European Commission. In this ethical review, account is taken of principles reflected in the EU Charter of Fundamental Rights and relevant international conventions.

An ethical review is not «stringent» just because you say it is. The first thing that such an ethical review would have to reflect is the simple fact that the human embryo is a human being, i.e. that it is «one of us». Only where this fact is acknowledged can a sound ethical decision be taken.

(12) The European Commission will … not submit to the Regulatory Committee proposals for projects which include research activities which destroy human embryos, including for the procurement of stem cells. The exclusion of funding of this step of research will not prevent Community funding of subsequent steps involving human embryonic stem cells.

This is where it becomes most apparent that the Commission’s current practice is not sufficient to meet our request. You do not need any «research» to kill human embryos. Instead, the ethical problem is that human embryos are used as a material for research. And we may suppose that if such research will ever lead to any «therapeutic» use, then that «therapeutic» use will in each case imply the destruction of human embryos – be they
aborted foetuses, or embryos that are «left over» from medically assisted procreation, or specifically created for that purpose. (It should be noted that the Fundamental Rights Charter, which the Commission uses as its point of reference, deliberately does not exclude the cloning of human beings for socalled «therapeutic» purposes.

I could go on endlessly with similar remarks on the other provisions of that protocol. But the few remarks I have made are amply sufficient to demonstrate the glaring inaptitude of what the Research Commissioner thinks is a sufficient ethical standard.

1.4. The ethical and the utilitarian argument

This initiative is based on a stringent factual and ethical argument. The human embryo is a human being; it is «one of us». Because it is one of us, it has human dignity. Because it has human dignity, it is an end in itself. It therefore cannot be «used» for purposes that are not its own, just as we all do not want to be used for purposes that are our own. Nobody would accept that an adult person be killed and its body (or parts thereof) used for research purposes, even if that research could lead to the discovery of highly efficient new medical treatments. There is no possible benefit, however big it may be, that could justify the killing of an innocent person.

We are, however, aware that this audience also comprises people who are not receptive to merely ethical arguments. In contemporary society there are many who have a purely pragmatic, utilitarian world-view. Such a worldview might lead them to believe that the destruction of human beings, in particular if those human beings are «only» embryos, can be justified if it leads to the development of new therapeutic uses. According to this point of view, one person can be «sacrificed» (maybe even against its will?) if that yields a benefit for many.

To those of you who hold such views I would point out that even under a merely utilitarian perspective the EU should discontinue funding research on potential therapeutic uses of human embryonic stem cells. Already back in 2006 the Commission’s claim that this was «an area of science which holds much promise» had little plausibility, because already at that time there were many therapeutic applications involving the uses of adult stem cells, while not a single research project on human embryonic stem cells had yielded any therapeutic use. Today, more than seven years further on, this assessment has solidified: while there is steady progress regarding the therapeutic use of adult human stem cells, there is still not a single case in which embryonic stem cells have successfully been used for therapeutic purposes. Indeed, where such experiments have been made with animals, the transferral of embryonic stem-cells in nearly 100% of the cases has triggered the development of highly aggressive cancers. A risk of nearly 100% where responsible therapeutic use would require the risk to be 0%.

Over the last decades, the lobbying in favour of human embryonic stem cells has played on false promises. It was pretended that this research could soon lead to the development of treatments against Parkinson’s disease, Alzheimer, and practically every and any disease you and I would not want to be the victims of. It was pretended that the breakthrough was imminent.

People in wheel chairs were used, or should I say misused, to advocate the funding of human embryonic stem cell research, as if they personally could hope to benefit of any new therapy derived therefrom. Now, seven years later, we must say that these promises were false, and that many wellmeaning people have been misled.

It therefore does not seem a big sacrifice for the EU to give up the funding of this ethically controversial research. Remember, we are not asking to cut down the EU research project. Adopting our proposal would mean to free the available funds for other cutting-edge research projects, and to put them to better, more efficient, use.

The sole purpose of this initiative is to strengthen and re-enforce the protection of human dignity from the moment where life begins, i.e. from the moment of conception.

This human dignity is recognized already by the existing EU acquis. In particular, our initiative draws its inspiration from the CJEU’s decision in the case of Greenpeace vs. Brüstle, which clarified that the term «human embryo» comprises the human being as from the moment of conception.

In this context, it is worth mentioning that it was already the EU legislator, not the CJEU, who determined that the human embryo is «one of us», and that therefore it is worthy of legal protection. That is why the EU Biopatent Directive explicitly prohibits the patenting of any new technology that would exploit the human embryo or parts thereof for commercial or industrial purposes. In other words, the human embryo cannot be subject to the interests of other persons, because it is itself a human being.

The EU legislator made that determination in line with the Council of Europe’s Bioethics Convention.

The Brüstle vs. Greenpeace judgment, by contrast, adds one very important clarification: the term «human embryo» applies from the moment of conception. In other words, there is no stretch in time during which the human being is «not yet an embryo», or during which it is «not yet the bearer of human dignity». Conception is the moment where a new and unique human being is created – one that has a unique genetic identity that is different from that of its mother. The human embryo is not «something», but it is «someone». Each of you has once been such an embryo, and each embryo is therefore one of us.

It is notable that the Court has based its decision not on a specific definition of the term «human embryo» in the Biopatent Directive – there is none – but on common sense. The decision therefore concerns not only the Biopatent Directive, but is of general validity: it will have to be taken into consideration whenever and wherever EU legislation makes mention of the «human embryo».

Assisted Suicide of people with disabilities increases in Italy
junio 22, 2022
Ir a Tienda