PRESS RELEASE VI EUROPEAN FORUM ONE OF US 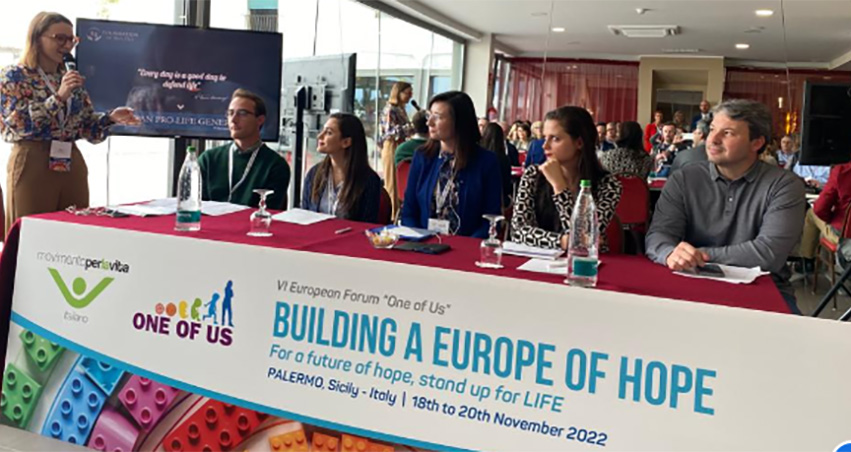 The VI edition of the One of Us European Forum held from November 18 to 20 in Palermo, Italy, has brought together more than 400 participants in this beautiful Italian city. The meeting has been made to coincide and has been held jointly with the 42nd National Congress for Life in Italy.

The organizers point out that the meeting has been, and it is a living hope, a hope for the present and for the future. The culture for life broadens and frees the mind and, above all, it is truly the path to peace.

Numerous young Europeans have opted for their commitment and awareness in the defense of Life and peace, since both are strictly connected. At the same time, it has been asked to bet on recovering the freedom of women, protecting, and helping motherhood. Abortion is not a right, and never has been, but a violation of the freedom of each woman.

Marina Casini, president of the Italian Movement for Life (MPV), has affirmed that «The truth about the value of each human being, that is, of each person, is a condition of hope». An extremely topical thought that opens a wide and fascinating horizon where the issue of the right to be born, connected with the «close heart-to-heart bond» between mother and child during pregnancy, is seen as the central founding theme of a culture, of a society. We cannot make any progress if we do not start from a total look at man: the man without a face and without a name who have not yet been born. That is why Mother Teresa called them «the poorest of the poor”. A society that puts these children at the center, symbol of all fragility and that embraces women who carry a child in their womb, is a society that makes the revolution of hope, that has embarked on the path of real progress, of a new construction in all sectors: politics, economy, right either. Here it is possible to find the energy to build hope, but also peace, as the title of the meeting itself indicates: «Building a future of Hope in Europe: to defend peace, let us defend life»

Jaime Mayor Oreja, president of One of Us, has emphasized the need for European mobilization against the inclusion of abortion as a supposed right in the Charter of Fundamental Rights of the Union. A society that admits this aberration is a society plunged into a profound crisis of civilization.

In this VI European Forum -which has had more than 400 participants from 20 European countries, the United States with the participation of Heartbeat International and the United Kingdom- we rediscover the vigor and topicality of the value of human life within European civil society, widely represented in Palermo.

This meeting fills the ONE OF US European federation and all the participants with hope for a future in which all people can see their right to live recognized in Europe, and especially in those situations in which each one of us is most vulnerable.

During a dinner with all the participants, the One of Us Federation has awarded the One of Us Prize 2022 to Dr. Jerome Lejeune, posthumously, for his «ardent defense of life». Award that was given to his daughter Karin.

Prof. Lejeune carried out his defense of life in research, in caring for patients -especially children suffering from Down syndrome- and in the field of public opinion. Often going against the current, he did not stop raising his voice in favor of respecting the person from his conception.

Jean Marie Le Mené, President of the Jerome Lejeune Foundation in France, encouraged all the participants to continue raising their voices and singled out the young people whom he asked to follow the legacy of Dr. Lejeune and Prof Carlo Casini with courage, because with their mobilization and testimony they keep alive this reality and this hope in the defense of the life of each human being, since our society and our future as a civilization depend on it.