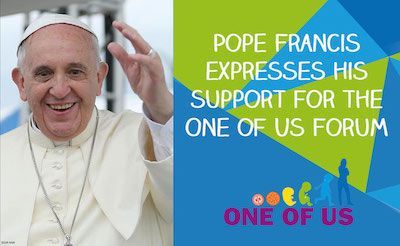 In a letter dated 16 February 2016 addressed to the Vice President of the One of Us Federation, Thierry de la Villejegu (Director of the Jerome Lejeune Foundation), and Gian Gigli (President of Movimento per la Vita, Member entity of the Federation), Pope Francis announces that he «heartedly greets the participants [of the Forum] and assures them of his prayers ».