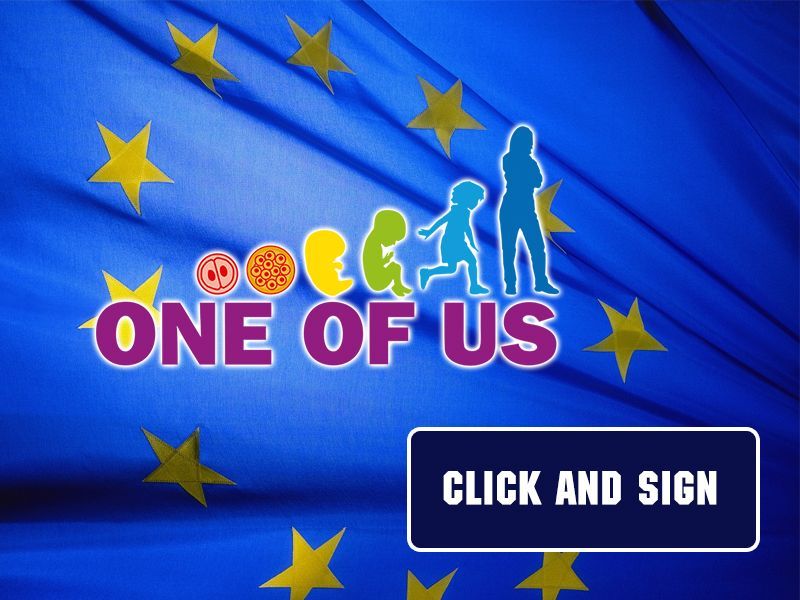 Next 22nd September will be the European Day in support of the initiative «One of us»: Click & Sign Now!

On Sunday, 22nd September, a joint collection of signatures in support of the initiative «One of us» will be organized in all countries of the European Union. With this aim, the Initiative organizers active in the 28 EU member states (including Croatia, since they joined the EU on 1st July) want to express the concern of the European society as a whole on the need of a greater protection of the human embryo. EU policies currently fund research and development cooperation, among other things, where the destruction of human lives takes place. This practice is highly inconsistent with the defense of human rights promoted by the Union as a whole and, particularly, with the decisions of the Court of Justice of the EU, which have raised the need to protect the human embryo from the fertilization of the ovum (Brüstle vs Greenpeace, 2011).

Up to date, there are over 950,000 signatures in support of the European Citizens’ Initiative «One of us,» being one million signatures the minimum requirement for these initiatives to thrive in Europe. The collection of signatures will run until 1st November, but the initiative’s organization believe that the goal of a million will be largely achieved before the end of September and they trust to achieve, at least, a number of nearly one million two hundred thousand signatures in support of the human embryo throughout Europe.

For this purpose, on the 22nd September signatures will be collected in all member states of the European Union. This collection will involve all organizations working in defense of the human embryo in Europe as well as the different religious denominations in the EU.