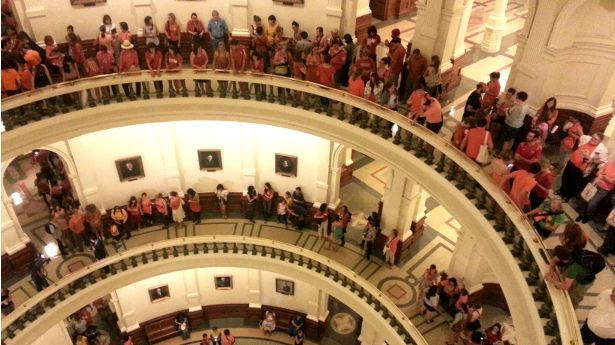 AUSTIN, Texas, June 26, 2013 (LifeSiteNews.com) – Amidst a mob of shouting pro-abortion advocates, a Texas bill to ban abortion after 20 weeks failed to pass despite securing the needed votes because the voting concluded two minutes after the session’s midnight deadline.

Democratic Sen. Wendy Davis successfully filibustered the bill Tuesday for eleven hours. After that a large crowd of abortion advocates, led by Planned Parenthood president Cecile Richards, took over and interrupted the proceedings by shouting. State troopers were called in and at least one protester was arrested.

On Twitter, the bill’s opponents urged fellow abortion advocates to “rush the floor” in order to stop the vote. Richards herself egged them on, tweeting: “Make some noise — louder!”

The maneuvering won approval from President Obama, who tweeted Tuesday night that “something special” was happening in Austin.

News organizations such as the Associated Press originally reported that the bill had passed in a vote of 19-10.  Then there were several hours of confusion until Lt. Gov. David Dewhurst officially confirmed at 3:00 a.m. local time that the vote was too late.

Dewhurst said «an unruly mob using Occupy Wall Street tactics» had blocked the bill. «I didn’t lose control of what we were doing,» he said, according to the Texas Tribune. «We had an unruly mob.»

Texas Governor Rick Perry, a strong supporter of the bill, could still call a special session to hold another vote.

The new law would ban all abortions after 20 weeks, when medical experts say unborn babies can feel pain.  Unlike the recent law that passed the U.S. House, the Texas law has no exceptions for rape or incest.

The bill also imposes tighter safety regulations on abortion facilities, requiring abortionists to maintain admitting privileges at local hospitals and bring their facilities up to par with other outpatient surgical centers.  Similar laws in other states have driven multiple substandard abortion clinics out of business.  Currently, 37 out of Texas’s 42 abortion centers fail to meet the bill’s standards.

An additional provision requires women who request abortion drugs to take each one of the entire multi-day series of pills in the presence of a medical professional.

Abby Johnson was present at the legislature with her five-day-old baby.

As Davis carried out her filibuster, she said, “I was just thinking, I can’t believe the lives of thousands of children in this state are dependent right now on someone not leaning on their desk or not needing a bathroom break. It was pretty surreal.”

“It’s pretty shameful that these people that are against [the bill] would go to these tactics and do some of these antics … to try to silence the will of the people and the will of the voting body,” she said.

Lila Rose, president of Live Action, said this type of behavior should be expected from abortion advocates.

“A lot of people are talking about how the [abortion] movement should be ashamed of its behavior. How shameful it is,” she wrote. “But this is the same movement that champions ripping apart helpless, vulnerable, even pain-capable children in the womb.”

“A movement that’s okay with that will have NO SCRUPLES about hijacking the legislative process. We waste time wagging fingers over civility,” she said. “[Gov. Perry], please don’t let a screaming mob determine how your state is governed. Please call another session.”

Dr. Charmaine Yoest, president of Americans United for Life, thanked the pro-life Texas Senators “for attempting to protect the lives and health of women and girls routinely victimized by a profit-hungry abortion industry, but sadly a large, well-funded, and powerful anti-woman coalition worked to block these much needed legal protections.”

“Since the trial of ‘house of horrors’ Philadelphia abortionist Kermit Gosnell, the nation has focused on what all too often takes place behind the closed doors of abortion clinics across America,” said Dr. Yoest. “The time is now to save lives and protect women from an unregulated, unmonitored, and unaccountable abortion industry.”