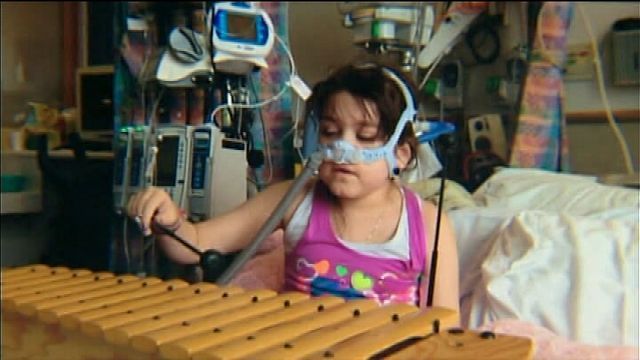 A federal judge has intervened to give hope to a young girl who needs a lung transplant as doctors have only given her weeks to live. HHS Secretary Kathleen Sebelius received national condemnation after she refused to get involved to help the girl.

Sarah Murnaghan has been hospitalized for three months with end-stage cystic fibrosis. She is not giving up hope. She wants to be a singer, but needs a lung transplant to live. Her parents have been with her constantly while she waits at The Children’s Hospital of Philadelphia.

This morning, Sarah’s parents asked a federal judge to intervene and order the Obama administration to alter longstanding organ-donation rules so she can get the lung transplant she desperately needs. A report shows the judge have given them hope that she can be put on the adult list:

A big victory in federal court today for 10-year-old Sarah Murnaghan, a dying girl in need of a lung transplant.

This afternoon, a federal judge granted the Murnaghan family’s request for a temporary restraining order, telling the Secretary of Health and Human Services to cease application of the “Under 12″ rule when it comes to Sarah.

The 10-year-old Newtown Square, Pa. girl has been hospitalized at Children’s Hospital in Philadelphia for three months with end-stage cystic fibrosis.

The temporary restraining order will last for 10 days. A preliminary injunction hearing is scheduled for June 14.

Earlier today, her parents filed an emergency motion for a temporary restraining order and a preliminary injunction in federal court. According to a news release sent by the family, they hope to prevent the Secretary of Health and Human Services from enforcing a policy that prevents children under the age of 12 from getting a lung transplant from an adult donor.

“We will not stand by and let Sarah die and we have filed in federal court for an immediate injunction to do what Secretary Sebelius will not: give Sarah and other children in her position a fair chance at life,” said Janet Murnaghan, Sarah’s mother.

The Philadelphia Inquirer has more on the request for the judge:

The parents of Sarah Murnaghan have asked a federal judge to intervene and order U.S. health officials to alter longstanding organ-donation rules so the 10-year-old Newtown Square girl can get the lung transplant she desperately needs.

In a complaint filed Wednesday morning in Philadelphia, lawyers for Janet and Francis Murnaghan contend that the rules discriminate against children under 12 by giving older candidates priority for donated adult lungs, regardless of their medical urgency.

The lawyers have asked for an emergency hearing and hope to persuade U.S. District Judge Michael M. Baylson to enjoin U.S. Health and Human Services Secretary Kathleen Sebelius from enforcing the so-called Under 12 rule.

“If Sarah does not soon receive a set of donated lungs she will die,” says the 18-page complaint, filed by a team of attorneys from Pepper Hamilton LLP.

According to the lawsuit, Sarah’s doctors have concluded she is an appropriate candidate for an adult lung transplant, and that pool of donated organs is 50 times larger than the pool of available lungs from child donors.

The lawyers contend the Under-12 rule “serves no purpose” and was crafted in 2004 when health officials had insufficient data to build a system to determine the child organ-transplant candidates with the greatest need, as it does with adults.

And they argue that “downsizing” and transplanting an adult lung into a child may once have been a medical challenge, but “that no longer is the case.”

Sebelius says she doesn’t want to intervene in the transplant case when other sick children are dying, but Sarah’s family says hey want the policy changed for all children awaiting a lung transplant, not just Sarah.

Meanwhile, members of Congress asked Sebelius during a congressional hearing about Sarah’s case:

Health and Human Services Secretary Kathleen Sebelius rebuffed an appeal from Rep. Lou Barletta, R-Pa., on behalf of a girl who needs a lung transplant but can’t get one because of a federal regulation that prevents her from qualifying for a transplant.

“Please, suspend the rules until we look at this policy,” Rep. Lou Barletta, R-Pa., asked Sebelius during a House hearing Tuesday on behalf of Sarah Murnaghan, a 10-year-old girl who needs a lung transplant. She can’t qualify for an adult lung transplant until the age of 12, according to federal regulations, but Sebelius has the authority to waive that rule on her behalf. The pediatric lungs for which she qualifies aren’t available.

“I would suggest, sir, that, again, this is an incredibly agonizing situation where someone lives and someone dies,” Sebelius replied. “The medical evidence and the transplant doctors who are making the rule — and have had the rule in place since 2005 making a delineation between pediatric and adult lungs, because lungs are different than other organs — that it’s based on the survivability [chances].”