FEDERATION ONE OF US DISPLAYED IN DUTCH PRO-LIFE MARCH. 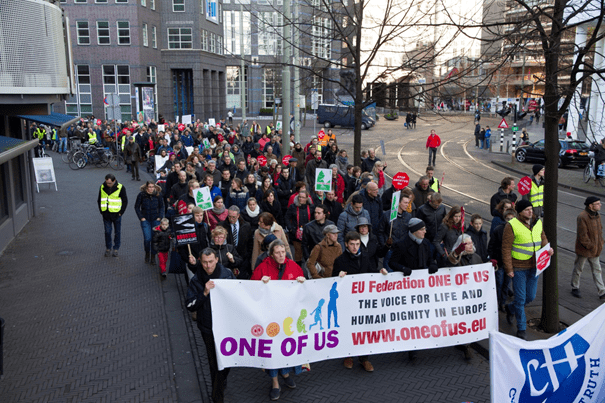 On December 6, 2014 more than two thousand five hundred people gathered in The Hague Netherlands,  to call to end abortion. The Hague is the capital holding seats of the government and is also the place where the International Criminal Court has its offices as well as Europol. Further the International Court of Justice has its domicile in the Peace Palace. When will justice be done to the thousands and thousands killed in the womb around the globe each day?

The March was organized by Schreeuw om Leven, a Dutch pro-life organization established almost thirty years ago by Bert and Willy Dorenbos. Schreeuw om Leven is amongst other NGO’s a founding member of the Federation One of us.

Prior introducing the international guests, Cry for Life’s Michael van der Mast and member of the Executive Committee of the newly formed Federation One of us, unrolled the Federation banner.

The European Commission turned down a request to consider a firm legislative proposal to defund all activities in the fields of medical and scientific research and development aid earlier this year. Pro-life organizations throughout Europe have joined hands and founded the Federation. The Federation will be a voice of the voiceless in the buildings of the EU institutions in Brussels and Strasbourg. 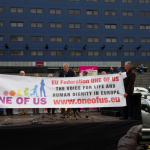 Van der Mast explained the banner will be carried to various pro-life marches in Europe the coming years. By doing so the Federation will be disclosed to the general public and politicians will be remembered that the voice of almost two million European citizens will not be silenced by the rejection of the European citizens’ initiative One of us by the European Commission earlier this year.

The banner was carried through the streets of The Hague during the March following the rally. Amongst the international guests where Paul Genoux vice-president of the French Choisirlavie.fr; Laurel Hughes Leadership Inst. Washington DC; Daniel Becker president of the Personhood Alliance; Pat McEwen director Life Coalition International and Maaike Rosendal of the Canadian Centre of Bio-Ethical Reform. 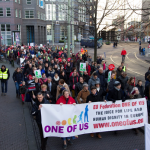