«Every day Texas law goes into effect, up to 200 babies’ lives are saved» 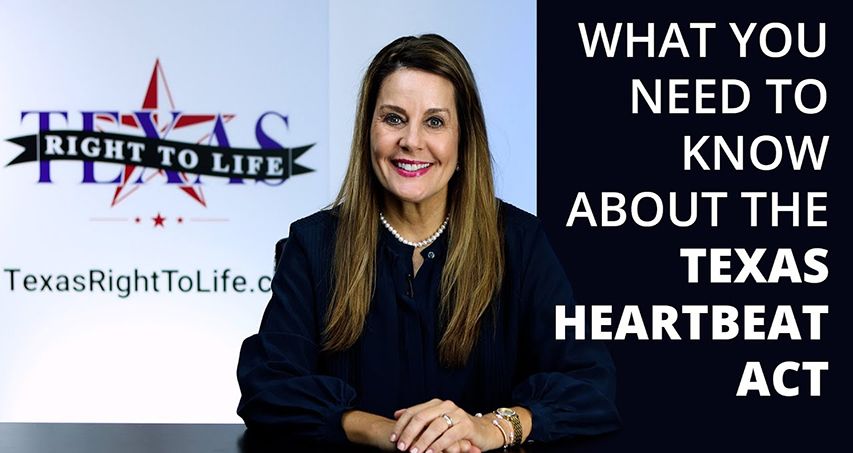 Abortion is a fiercely contentious issue that pits pro-life groups against pro-abortion in Latin America and in the United States as well. At the legal level, the debate runs aground on several points, above all, if it is possible and since when to consider that the fetus is an unborn person and if there is an absolute right of self-determination of women over their own body, including the other life that they are brewing inside. In the United States, a woman already has the federal constitutional right to obtain an abortion during the first stage of pregnancy, and states are even legally prevented from legislating forbidding or preventing it through their officials.

Although the debate seems settled, pro-life groups have found a way to avoid that the new state legislation is not challenged by the Supreme Court, which in the case of Texas has not prevented it from finally reaching this highest body of justice. However, from the Rio Bravo to the south, where there are pro-life laws that penalize or limit abortion, the strategy of feminist groups is to legalize broad and unrestricted abortion through legislation –as in the case of Argentina– or through the courts –as the case of Mexico.

The law that protects the heartbeat

With the intention of putting limits on the abuses that a permissive legislation and a culture of discarding promote, the Republican and Democratic legislators of the Texas state congress in the United States, approved last May the «Heartbeat Law» (in Spanish the «law of the heartbeat ”, which in fact does not prohibit or penalize abortion in a generalized way, but rather that which occurs once the fetal beat already exists, which according to the new law is understood as the“ constant and repetitive rhythmic contraction or cardiac activity of the fetal heart within the gestational sac ”and that could occur around the first 6 weeks. In a passionate speech, the Governor of Texas, Greg Abbott, accompanied by many of the legislators who promoted this law, said that “we are working together on a bipartisan basis to pass a bill that I am about to sign that guarantees that the The life of every unborn child with a heartbeat will be saved from the ravages of abortion. ‘

Texas is not the first to legislate in this regard

Already other states such as Georgia, Mississippi, Kentucky and Ohio also passed laws of the «heartbeat» that prohibit abortion once cardiac activity can be detected in an ultrasound and therefore an objective proof of the existence of a new life that is indisputably must protect. Those laws also tried to prohibit abortion around six weeks of pregnancy, 18 weeks earlier than what is legally recognized so far in the United States, which allows abortion up to 24 weeks. Unfortunately, these state laws have been held back by judicial remedies and have not been applied.

The new law goes into effect

Unlike similar laws in other states, Texas’ has fared better in part by learning from these failed attempts. Although this law has also been appealed to the Supreme Court, on September 1, said court denied the request for a precautionary measure that was intended to stop its entry into force. In a tight majority decision of just 5 to 4 magistrates, the highest court of justice in the United States found that “the applicants now before us have raised serious questions regarding the constitutionality of the Texas law in question. But their application also presents complex and novel procedural issues on which they have not borne their burden. ‘ Not only the insufficient support played in favor of the new law, but also the particular formula used by the legislators who, knowing the previous action of the court, avoided entrusting the application of the law to their officials and, on the contrary, enabled any employee of a clinic or private person can report its breach and even recover legal fees.

However, the victory of the state of Texas against abortion may be temporary, since the same sentence indicates that «although the Court today denies the request, it makes it clear that it cannot be understood that it supports the constitutionality of the law» and that «it may do so promptly when that issue is properly raised. ‘

They celebrate the sentence

The pro-life organization Texas Right to Life has expressed satisfaction with the Supreme Court ruling that upheld legislation restricting abortion in Texas. «The abortion industry does not think about children or women,» they denounced while celebrating the court ruling. Likewise, they added that «it is time to take the success of Texas and replicate it in other states,» said a spokeswoman for the organization.

The abortion industry does not think about children or women

Texas Alliance for Life, an organization whose objective is to protect innocent human life from conception to natural death, upon hearing the ruling celebrated that “every day that the Texas Heartbeat Law comes into force, the lives of up to 200 unborn babies, while hundreds of Texas pregnancy centers and birthing homes are ready to help women with unintended pregnancies. «

The US Department of Justice filed a lawsuit against Texas in mid-September to block the law that went into effect. The lawsuit, filed in a federal court in Austin, Texas, seeks to block this law and «protect the rights that Texas has violated.» Recently, the attorney general of Texas, Ken Paxton, has criticized that the ban on abortion in the state is serving as a «stimulus» for trade between the rest of the United States territories thanks to the trips made by women who want to abort . These assertions of the attorney general have come about through a series of reports presented in the framework of the challenge of the Department of Justice.

Texas and Coahuila are separated only by the Rio Grande; but both, almost simultaneously, have recently been impacted by court rulings on abortion. However, the Mexican case is not a new matter. In 2017, the State Congress of Coahuila approved its Penal Code establishing in its article 195 that «whoever causes death to the product of conception, at any time during pregnancy, commits an abortion.» Said legislation generated an action of unconstitutionality brought by the Attorney General’s Office demanding the invalidity, among others, of the aforementioned article. After 4 years in the process, on September 7, the Supreme Court of Mexico unanimously ruled that “it is unconstitutional to criminalize abortion in an absolute manner, and it ruled for the first time in favor of guaranteeing the right of women and pregnant persons to decide, without facing criminal consequences. The Supreme Court justified in its ruling that the «product» of pregnancy deserves protection that increases over time as the pregnancy progresses. However, he specified that «this protection cannot ignore the rights of women and pregnant people to reproductive freedom.»

In a statement entitled «In favor of Women and Life» the Bishops of Mexico stated that «the problems faced by women and the legal status of the unborn child are a complex issue with anthropological, scientific, philosophical and ethical aspects that do not it is possible to reduce to a resolution in a judicial matter ». Likewise, they warned that the reasoning used is based on interpretation parameters that «under the guise of progressiveness translate into the constitutionalization of the right to decide, ignoring other legal rights of the same hierarchy.» Finally, they regretted that «faced with the apparent dilemma about not criminalizing the woman who aborts and preserving the life of the unborn child, the Court has chosen to rule out the second, without seeking the safeguard of both.»