Born with half a heart… but my baby’s so strong 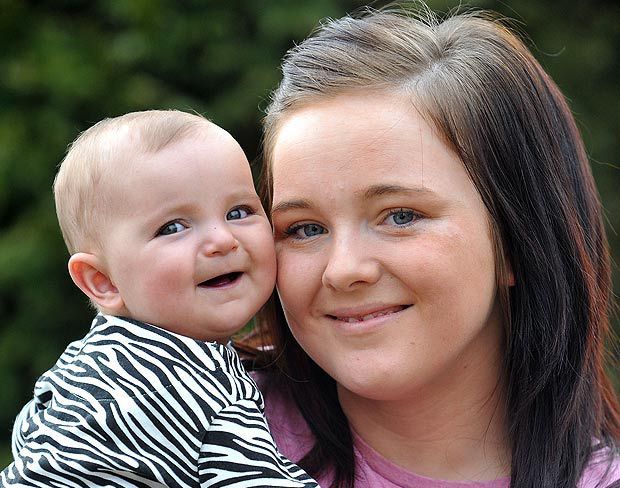 ‘Little fighter’ Scarlett amazes mum. BRAVE Scarlett Crowther beams in her mother’s arms — after surviving a rare condition which saw her born with half a heart.

The baby was given a 50/50 chance of surviving the defect — but battled through TWO lengthy heart ops, including one at just five days old.
Scarlett is now a healthy nine months. Mum Rebecca Turner, 20, said yesterday: “She’s a little fighter.

“When I hold her now I just can’t believe how healthy and happy she is. She’s my miracle baby.”

Rebecca found out Scarlett had the defect, called hypoplastic left heart syndrome, at her 20-week scan.

It meant the left side of Scarlett’s heart did not develop in the womb.

Full-time mum Rebecca was given the option to terminate, but chose to carry on with the pregnancy.

Days after Scarlett was born in June last year, she had a seven-and-a-half hour op at Alder Hey Children’s Hospital in Merseyside.

Surgeons put an artificial tube inside her to help the blood flow to her heart.

Scarlett had more major surgery at eight months when docs attached a vein from her neck to her heart in an eight-and-a-half hour op.

Rebecca, who lives with boyfriend Daniel Crowther, 22, in Oldham, Gtr Manchester, said: “I couldn’t believe it when she was allowed home six days later.”

Scarlett has to have another op between the ages of four and eight to make sure the vein stays attached.

But Rebecca said: “Although her heart will never be fully formed she’ll be able to lead a normal life.”