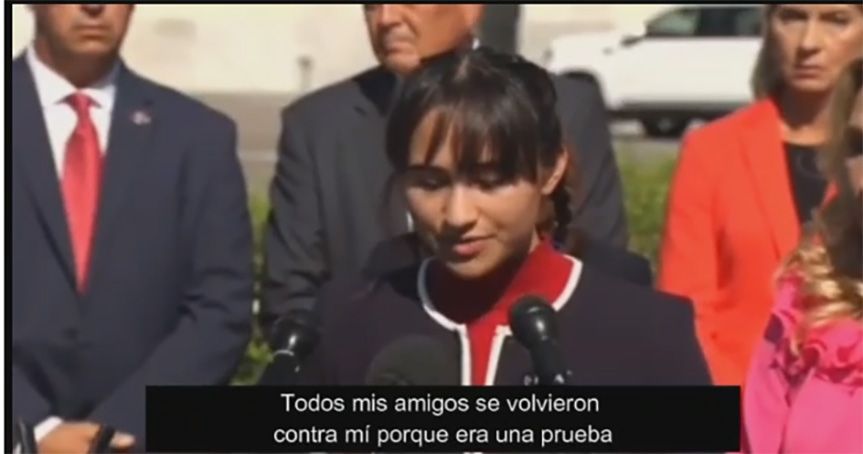 Chloe Cole is an 18-year-old transgender teenager who underwent a gender transition and double mastectomy between the ages of 12 and 16, and now, after regretting her decision, she leads the defense of children and families that they are going through the same process to protect them from the existing misinformation about the irreversible consequences that it entails, both physically and psychologically.

Currently, Chloe travels throughout the United States giving her testimony. She herself explains how, before deciding to be operated on, she had to face different abuses in her childhood due to her complexion and her shyness when it came to relating. At just 11 years old, he found an escape route in the LGBTQ environment on the internet, where he interpreted that “all you have to do is subscribe to this ideology and then I will be an accepted, celebrated and valued member of the community that is most talked about. on earth. I saw the incredible amounts of praise they were receiving online and subconsciously longed for it.”

Chloe denounces the false information that is given many times from the media driven by gender ideology. He also points to pediatric institutions that believe best practice is to remove healthy tissue from children while administering the drugs used to chemically castrate high-risk sex offenders. It also underlines the criticism that those politicians who think that this practice is morally wrong face, accusing them of being fascists or fanatics.

“No child deserves to suffer under the knife of a gender-affirming surgeon. America’s children deserve better,” Cole said in an interview broadcast on September 21.

Finally, Chloe defends the parents of these families. She explains “my parents feared for my life. They were willing to sign anything the doctors asked for. This was not with informed consent. It was a forced decision under extreme duress.”

We have published in our Observatory other dramatic experiences of those who have suffered unacceptable gender transition processes, and who have become victims of an unscientific and harmful ideology. As we have previously detailed, the approach to cases of gender dysphoria and both pharmacological and surgical transition treatments require previous multidisciplinary diagnoses of the affected people to rule out comorbidities and pre-existing disorders that may be at the origin of these processes, as well as their consequences. consequences including serious side effects that may be irreversible.