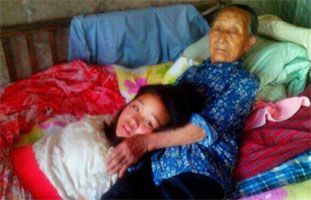 Ms. Cai, who has one older brother, was raised by a single father who came under the jurisdiction of the One-Child Policy. In Sichuan, fines for violating the policy range from $4,200 to $31,400 while the average annual urban income is only $2,919. Because her father could not afford the fine, Ms. Cai never received a hukou, the government registration needed for access to medical care, public transportation and education.

Cai began attending school in a different village in first grade. But without a hukou, she could not even receive school lunches. Officials in Chishui, her hometown, denied her and her father’s repeated requests for the fines to be waived.

Yet Ms. Cai remained passionate about learning. Her teachers described her as a hardworking student, saying, “In order to learn English, Ms. Cai got up at 5 a.m. to read English every day for quite some time. She just completed final exams, and she ranked second in her class.”

Before swallowing pesticide on the evening of June 28, Ms. Cai made up her own government identification number using her birth date and wrote it on the inside of her notebook. She also wrote a note that read, “Dear brother, Dad, Mom, Grandma and Grandpa…I’m so sorry to all of you. I have a lot to say to you all at this moment, but time won’t wait for me. I’m standing at the track of my memory, seeing my memories as pictures passing in front of me.”

When her family realized Ms. Cai had swallowed poison, they immediately brought her to the hospital. But the pesticide, paraquat, causes untreatable respiratory failure and death in 90% of people who consume it. The hospital could only send the family home to wait.

Tragically, Ms. Cai is just one of 500 Chinese women who commit suicide every day. China is the only country in the world (except the small island nation Sao Tome and Principe) in which more women than men take their own lives. Centuries of oppression have stripped Chinese women of value and dignity. For women like Ms. Cai, the Chinese government’s brutal enforcement of the One-Child Policy makes life seem unbearable.

LifeNews Note: Brian Lee is the director of All Girls Allowed, a human rights group that fights the one child policy in China.

Ireland denounces manipulation and sectarianism in the Report on the application of the abortion law published by the Government
julio 13, 2022
Ir a Tienda