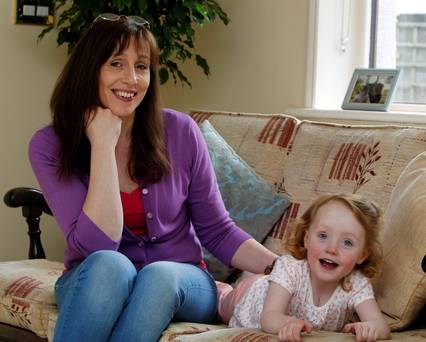 A MUM was advised by her doctor to “travel to England” for a termination because of her baby’s foetal anomaly.

She was told her foetus had a life-threatening congenital heart defect and a rare brain disorder – and would have little chance of surviving outside the womb.

Today, adoring mum Jennifer tells of how she and her husband felt “judged” for not choosing abortion – and how happy they are that they didn’t.

Jennifer and John Kehoe were told that their baby had little chance of survival outside the womb.

If she survived, her quality of life would be diminished.

But Jennifer said that, if they had gone ahead with the termination, they would never have experienced how their “delightful little girl” would “blow us away with love”.

The Kehoes’ daughter was diagnosed in the womb with a life-threatening congenital brain malformation called Dandy-Walker Syndrome and a heart defect.

As soon as the abnormality was identified, the couple said their obstetrician immediately offered to write them a letter to ‘go to England’ and have a termination.

Jennifer and John, a GP, say that they were “advised to have an abortion by an Irish obstetrician on the grounds of foetal anomaly”, but are eternally thankful that they decided against.

“The very first thing our obstetrician suggested was, ‘Go to England’. We decided against that and to give our daughter a shot at life, however long or short that might be,” Jennifer said.

Louise (3) has now come through three heart operations, her cognitive development is normal and she is expected to lead a long and normal life.

However, Jennifer, who is now a mum of six, said that she and her husband felt “judged and punished” for deciding not to abort their baby.

“The very first thing that was said to us by the obstetrician was: ‘A lot of people would go to England’. And then there was a pause,” Jennifer told the Herald.

“Abortion would have been so far off from what we were thinking so we were so shocked.”

Jennifer was 42. The couple decided to have an amniocentesis or amniotic fluid test to check for chromosomal abnormalities.

“I had loads of miscarriages since the last baby – we had five children and the youngest was six,” Jennifer said.

“Abortion was never ever what we were thinking of, not even for the single flicker of a second.”

Jennifer from Naas, Kildare, said that once the diagnosis was outlined to her, she began to grieve for her unborn child.

“I said to John, ‘I hope that the baby dies soon’ so that I could start the grief process.

“But about a day later I started to hope that the baby would get to 24 weeks, so she could get a birth cert. During this time we were handed a card for a bereavement

councillor and quite quickly after that I said ‘I want this baby to live, no matter what.’

“If we had made an appointment for England there and then, we wouldn’t have had the chance to come to the third point in the thought process – that we would do anything to save our baby.”

The amniocentesis identified that there was no chromosome abnormality.

“It was only then that we got to see a cardiologist,” Jennifer said.

The Kehoes do not wish to name the hospital where the advice was given. But Jennifer wanted to tell her story to inform parents of their options when they are given information about terminations.

“Whether you are pro-life or pro-choice, it is about the pressure that doctors put on you to make a decision,” she said. “The choice isn’t being given.

“Doctors are pressuring people to go to England if there is a foetal abnormality and then punishing them if they don’t make that decision.

“I think it was a eugenic attitude, that people who are disabled are a drain on resources.

“When the cardiologist saw us, he was the first one to call her a baby and said, ‘I give this baby a very good prognosis’. I found that much harder to get over, that she wasn’t treated like a baby.

“I always remember the very last thing that was said to us by the obstetrician on the last day, ‘50pc mortality by age five, John.’“

Dandy Walker Syndrome affects one in 2,500 babies born and can severely impact brain development, speech and movement. Symptoms include slow motor development and progressive enlargement of the skull.

But Louise has none of these problems. She faced serious heart operations, but pulled through each one stronger than ever.

“If some of the babies have a strange chromosome deletion, there is no way of knowing how the baby will turn out.

“Louise is completely normal, she has this heart condition and she will be monitored all her life.

The mum-of-six acknowledges that she is firmly pro-life and doesn’t agree with abortion “in any circumstance”.

“To take an innocent human life is always wrong,” she said.

“But when I see Louise now, the amount of people whose lives she had touched: everyone loved her before she was born.”

And she believes that Louise was the making of their family. “The eldest is 17 in June but for all of the children to see Louise fighting to live, to see how people have taken her on, I see a difference in them.”