Citizens' Initiative "One of Us" for the respect of human life. Next Step: European Commission decision. 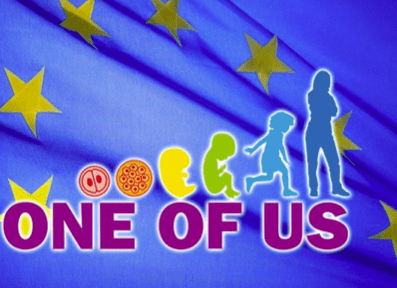 The European Commission (EU) must decide before May 28 on how it intends to take action concerning the request of the European Citizens’ Initiative “One of Us” to introduce into the European regulatory an ethics clause explicitly excluding European Union funding any activity that destroys or involves the destruction of human life at the embryonic or foetal stage. This applies in particular to the European funding for research involving the destruction of human embryos, and financing abortions in the context of aid to developing countries.

The European Citizens’ Initiative is a mechanism of participatory democracy introduced by the Lisbon Treaty. It enables one million EU citizens to submit a legislative or policy project to European institutions. It is about sharing with citizens, under certain conditions, the power of legislative initiative initially assigned exclusively to the European Commission.

One of us has raised nearly two million signatures in a year, making it the largest petition in the history of European institutions. The Commission and the European Parliament have auditioned the representatives of the Initiative on April, 9-10 this year to help the Commission in its decision to initiate a policy or legislative action.

These hearings gave the opportunity to the Initiative representatives to publicly explain their application and reveal the contradictions of European policy in this regard.

This Initiative is based on the scientific fact that every individual life is an uninterrupted continuum from conception to death. It is the public testimony of millions of European citizens’ consciences who recognize humanity and individuality in every human being from conception, and who require from the EU, within the limits of its powers, to respect the life from conception. Whether in research, industry or development, no true progress can be made based on the negation, exploitation and destruction of humanity at the beginning of a human beings existence.

This initiative is consistent with the European law which recognizes the human dignity of unborn life. The Commission also recalled on April 9, it is in order to respect this dignity that it refuses to fund the destruction of embryos under its policy research and to fund or promote abortion.

Similarly, the Court of Justice of the European Union in the case Brüstle against Greenpeace (2011) stated that the human embryo exists from conception and it is endowed with human dignity, and concluded that we can’t benefit from its destruction.

However, despite this recognition of the humanity and dignity of unborn life, the EU finances biotechnological practices involving the destruction of embryos. It also funds abortion in developing countries, including where it is forbidden, through organizations such as IPPF and MSI. (See the European Dignity Watch’s 2012 report The Funding of Abortion through EU Development Aid).

In terms of principles, the Commission is faced with a double contradiction. It finances practices that European law judges contrary to human dignity, and supports, as actively as discreetly, policies of abortions in poor countries, in the name of a concept of development based on population control.

It is these practices that the two million signatures of “One of Us” ask to stop.

This request is further justified in practice, because research on embryonic stem cells is surpassed by the induced pluripotent stem cells (IPS) discovered by Prof. Yamanaka, Nobel Prize in 2012. As a result, the private investments in embryonic stem cells research are collapsing (see for example the Charlotte Lozier Institute’s Report, Maryland Joins the Trend for Ethical Stem Cell Research, October 2013).

Regarding abortion, its legalisation and promotion does not improve maternal health. On the contrary, even in industrialized countries, it is a cause of maternal mortality. Abortions, whether legal or not, in addition of killing a human being, carry serious physical and psychological health risks and contribute to maternal mortality. Countries that restrict abortion have lower maternal mortality rates than those who facilitate the access. In Europe, Poland and Ireland have the lowest rates of maternal mortality. In Latin America, Chile has a maternal death rate that is 30 times lower than in Guyana where abortion has been allowed without restriction since 1995. Similarly Nepal, which places no restriction on abortion, has the highest maternal mortality rate in Southeast Asia, while Sri Lanka, whose maternal death rate is 14 times lower than that of Nepal, has some of the most restrictive abortion laws in the world.After Chile banned abortion in 1989, its maternal mortality ratio declined significantly (see E. Koch et al. (2012) Women’s Education Level, Maternal Health Facilities, Abortion Legislation and Maternal Deaths: A Natural Experiment in Chile from 1957 to 2007).

The vast majority of maternal deaths are due to a lack of basic health care. Although sometimes it is necessary to deliver a baby early to save the life of a mother, resulting in the premature birth of a baby that may not survive, it is never necessary to deliberately kill a baby to save the life of a mother. Most maternal deaths can be prevented with adequate nutrition, skilled birth attendants and basic care before, during and after childbirth. The effort to reduce maternal mortality and morbidity should not use limited resources to legalize, promote or expand access to abortion.

Initiative “One of Us” also places the European Commission before a democratic challenge: respecting participatory democracy by sharing the power of initiative.

The Initiative mechanism aims to make EU citizens’ participate to democracy, and to strengthen its democratic legitimacy. It is vital for the credibility of the European institutions that the expectations for this instrument are not disappointed.

Indeed, it is no longer to the Commission to assess the political expediency of a Citizen Initiative since it is demonstrated by its popular support. It is only to the Commission to consider the success of the initiative and to submit it to the next Parliament and Council in charge of the legislative powers in the EU. It is for them to discuss and vote on the request for One of Us.

A refusal by the Commission would be arbitrary and would ruin the credibility of the citizen initiative mechanism, and it would further weaken the democratic legitimacy of the European institutions.

Conversely, if the Commission respects the spirit of the Treaty and forward the Initiative to the Parliament and the Council, it will be a real step forward for European democracy and an opportunity for Europe to become more aware of the humanity of all human life from conception, and of the respect it deserves. An essential double progress.