You are here:
LifeMarch For Life 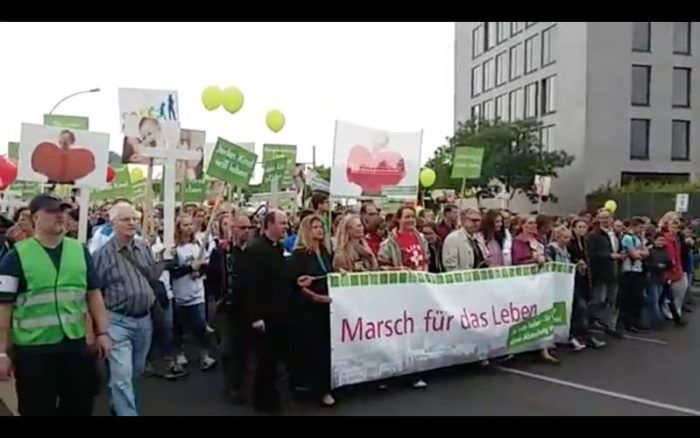 “Human dignity is untouchable” is the title Of the annual Berlin March For Life that will take place the 22nd Of September.

The meeting will Be by/before the Reichstag at 1 p.m. And the march will end at around 5.30 p.m.

“Yes to every child” and ” No advertising For abortion” Are only two among the slogans.

As a matter Of fact, as the organizing committee says, there are a lot of ” discussions in the media And in the German parliament about permitting  advertising For abortions”.

Indeed “with a growing concern of abortionists that there Are not enough  German doctors anymore to provide abortions, the debate, after years of silence, is  back in the middle of German society” explain the organizers.

The German March for Life welcomes participants from Germany and Europe, among others the One of Us Federation, that in the occasion will meet For its executive committee and will remember the dear friend and German member Manfred Libner.

A lot of young people will take part as ever  so the famous German band “Könige und Priester” will be on the stage and play before the rally and during the ecumenical service at its end.

There will be speakers from the United States, Israel and Germany.

“we had 7500 participants last year, and sincerely we hope that we will surpass this number this year. But you never know. It is so hard to get people to leave their comfort zone!”     point out the organizers.

on Friday 21st Will take place The pro-life conference That will focus on” the power of language and how it is being used to cover up the ghastly truth about abortion”.

It Is very strong the message written in the site www.marsch-fuer-das-leben.de :” It Is often said that abortion has to Be a free choice For women and the people who oppose is sensed/perceived as someone Who limits this free Choice. But which is the choice? Death does not leave any choice: it’s final. Abortion Is a final decision…A lot Of Women and men suffers For it all their life”.

In conclusion the promoters “attend to the right to Life to every people” For this reason Everyone Is welcome in Berlin!

Thousands of people gather in Dublin for Life and against abortion laws in Ireland
July 7, 2022

Abortion returns with force to the European Parliament: we must mobilize for life
July 4, 2022