After 50 years of legalization of euthanasia in Belgium, 2021 marks record numbers of deaths due to euthanasia 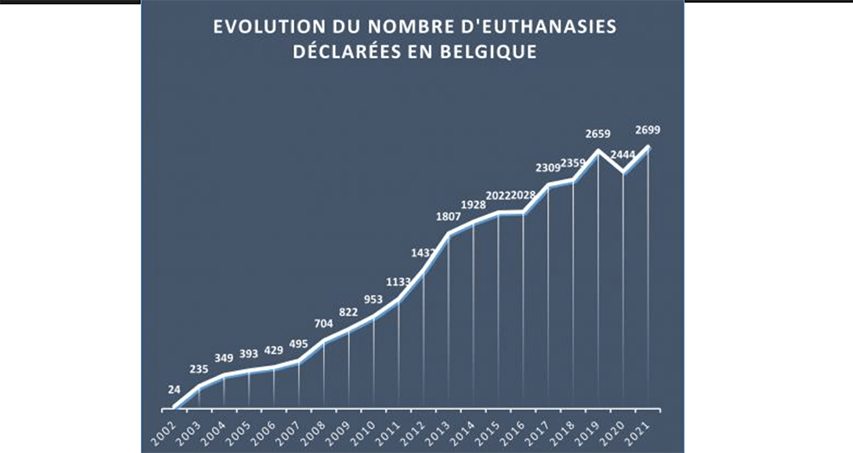 On Thursday, March 31, the Federal Commission for the Control and Evaluation of Euthanasia in Belgium communicated the figures relating to euthanasia declared during the year 2021.

The number of euthanasias officially performed last year thus reached a new record: 2,699 euthanasias were declared to the commission in 2021, a figure never reached before.

While the year 2020 had been marked by an unprecedented drop in cases (due to the health context, see news IEB), this parenthesis seems to have closed with the resumption of the constant increase in euthanasia.

To these euthanasias officially declared to the Commission, scientific studies estimate that approximately 25 to 35% of undeclared (and therefore illegal) euthanasias should be included.

While the majority of declared euthanasia cases concern elderly people, it should be noted that almost a third (32.2%) of people who officially died by euthanasia were under the age of sixty.

There is also a significant increase in the proportion of euthanasia performed at home, which confirms the trend observed last year. This increase is explained in particular by the restriction of visits to hospitalized patients, the hospitals thus recording a proportionally lower number of euthanasias.

The 2021 figures also confirm the substantial proportion of euthanasia performed due to polypathologies. These represent almost one declared euthanasia out of five, ie the second type of affection mentioned, after cancer. As the Commission indicates, poly-pathologies refer to “a combination of suffering caused by several chronic conditions which evolve towards a final stage”. In practice, these conditions may in particular consist of loss of sight or hearing, polyarthritis or incontinence. However, the Commission specifies that it is not in a position to verify the reality of the pathologies mentioned in the doctor’s declaration.

Finally, for nearly 20% of euthanasia declared in 2021, the patient was suffering from mental suffering, for the most part combined with physical suffering.

It should be noted that a more detailed analysis of the trends relating to euthanasia declared in Belgium will be published in the coming weeks by the Federal Commission, concerning the years 2020 and 2021.