Abortion. New law in Spain against pro-life groups. Del Pino (One of Us): “Attack on freedom of expression for those who defend life”

You are here:
AbortionLifeNewsOne of Us 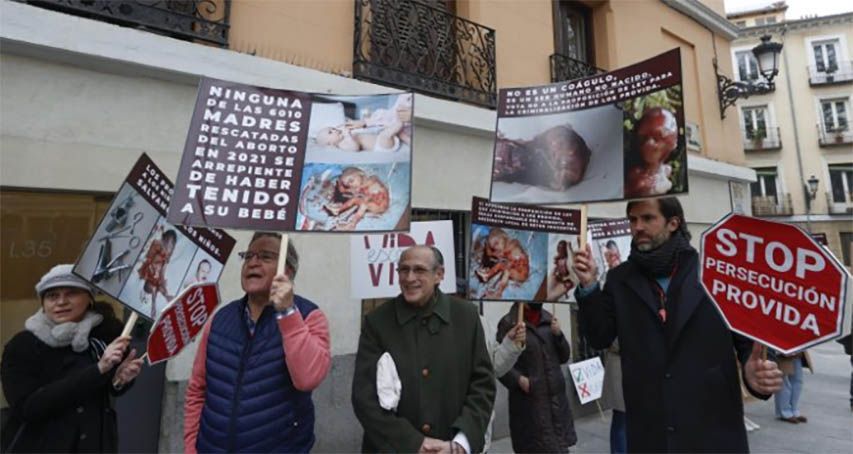 From three months to a year for those who “harass” or “intimidate” women who wish to have an abortion. A new law approved in Spain provides for this. According to Ana Del Pino, coordinator of the European Federation One of Us, “the aim is to eliminate any action that puts the abortion business at risk”

On April 14, a law came into force in Spain – approved by the Senate with 154 votes in favor and 105 against – which penalizes with prison sentences from three months to a year anyone “hindering the right” to abortion of a woman “with harassing, offensive, intimidating or coercive acts that damage her freedom “, or intimidate health workers who work in structures where voluntary termination of pregnancy is practiced. “It’s the primacy of business over life”, says Ana Del Pino, executive coordinator of the  European Federation One of Us. in her interview with SIR.

What exactly is this “harassing or intimidating” women or health professionals who work in health centers where termination of pregnancy is practiced? Has this ever happened in Spain?
There is no specification about such “harassing or intimidating”.  There is no case of such complaint. It has simply been a way of justifying a law that penalizes pro-lifers who peacefully gather in front of abortion centers to pray or help those women who freely and voluntarily want to receive information about the possibility of helping them at a moment’s notice of pregnancy in difficult situation.

It is one thing to pray in front of clinics, it is different to harass or annoy. The concept can be interpreted in a subjective or even arbitrary way. Isn’t there a risk of passing off actions that are not intimidating?
The absolute conviction is that the penalty provided by this law is only to eliminate the free exercise of freedom of demonstration, expression and even more, of beliefs. There is no case of complaint and it is simply that women who come to these centers cannot have help if they are not convinced to have an abortion.It is a deprivation of the rights and freedoms not only of pro-life groups, but also of women to their right to information. The certain risk is the penalization of certain groups of people in the exercise of their freedom.

Can this law be a way to gag those who defend life from conception?
We have no doubt that it is about eliminating any action at the level of civil society that could put the abortion business at risk. It’s about eliminating the dissident.

An attack on freedom of expression and demonstration?
Of course, this law supposes a limitation to the right to free expression of people who think that abortion is a tragedy and who think that society should offer women in their motherhood support and help.

It is an attack on democracy.

What kind of culture does this law express?
It is a clear expression of the culture of death and above all of the primacy of business over life. This law protects centers that receive money to end lives. It’s anticulture, it’s life for the money

As a European One of Us Federation, are you thinking of taking some action? What are your steps?
We are carrying out demonstrations in Spain and coordinating legal support actions for people who help pregnant women. Next May 7th we celebrate in Brussels the ONE OF US Convention on the future of Europe and we will denounce this attack on freedom. We encourage all One of Us supporters to join us at this event in Brussels and show that there is a society that supports and defends life in Europe. Macron’s statements about the inclusion of abortion as if it were a right in the Charter of Fundamental Rights of the European Union is also a direct attack on life.