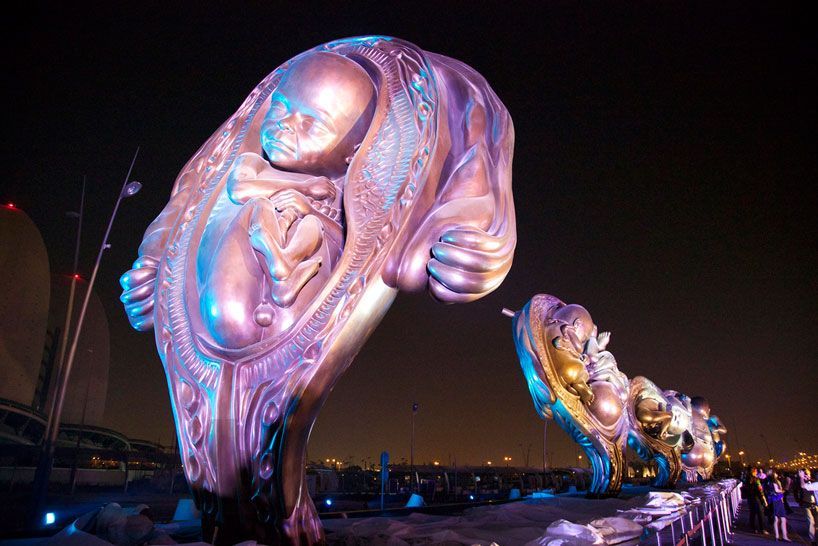 Yesterday a friend of mine sent me a link to a set of photos on the New York Times webpage. The first of 7 photos showed a set of giant white balloons.

To be honest, I was busy, wasn’t immediately interested, and didn’t bother to investigate the remainder of the photos until today. Lo and behold, when I did, here’s what I found.

The explanation (quoting from the story by Carol Vogel) was “For weeks, 14 giant balloons had been mysteriously parked in front of the Sidra Medical and Research Center, a hulking steel, glass and white ceramic building devoted to women’s and children’s health that is open on the outskirts of this city early next year.” (The city is Doha, Qatar.)

As is suggested by the accompanying photo (© penny yi wan) what those balloons concealed for weeks was “The Miraculous Journey,” 14 HUGE bronze sculptures that depict the unborn child’s journey from conception to birth. The author is a very famous–and even more controversial artist–Damien Hirst.

And what a spectacular opening on Monday evening! To the “amplified sound of a beating heart, members of Qatar’s royal family, government officials and local artists watched as each balloon, bathed in purple light, opened like a giant flower to reveal an unusually provocative public artwork,” Vogel wrote.

Three years in the making, the sculptures conclude with a 46-foot-tall baby boy! Collectively they weigh 216 tons and costs $20 million.

Most of the work, “fraught with secrecy,” was carried out in Hirst’s studio in England. “The first meeting I had with the architects, I was not allowed to tell them what the sculptures were because they wanted it to be a surprise,” Hirst told Vogel.

Vogel added drily, “There is nothing secret about them now: he positioned the sculptures so they can be seen both from the motorway and the desert.”

Hirst traced his fascination with childbirth to having children of his own. “Everyone talks about our life’s journey, but we have a whole journey before you’re born,” he explained.

Without getting into specifics, there was little or nothing in Hirst’s previous work that was remotely life-affirming. That changed as of Monday.

But the life-affirming exhibit marks a change in course for Hirst, whose previous works have included a diamond-studded human skull, and a variety of animals, some dissected, preserved in formaldehyde.

“Ultimately, the journey a baby goes through before birth is bigger than anything it will experience in its human life,” Hirst said. “I hope the sculpture will instill in the viewer a sense of awe and wonder at this extraordinary human process, which will soon be occurring in the Sidra Medical Center, as well as every second all across the globe.”