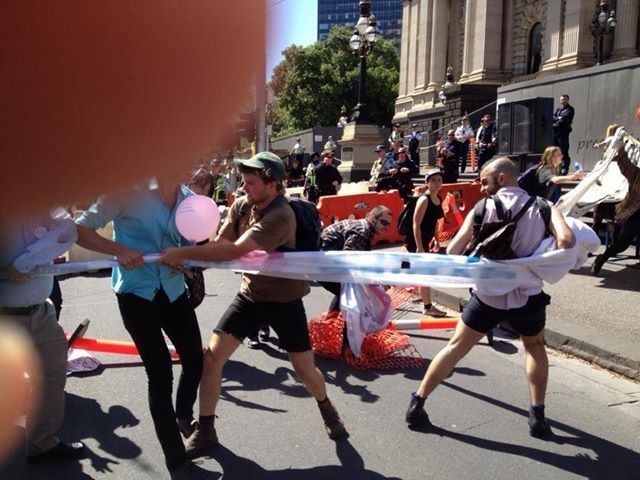 Pro-life advocates and a member of Parliament at the Australia March for Life were assaulted by thousands of pro-abortion activists over the weekend.

Bryan Kemper, one of the speakers at the event and the leader of the American pro-life group Stand True, offered LifeNews more on what happened:

Right now in Australia the March for Life is going on and the pro-lifers are being attacked by thousands of pro-aborts. Near riot situation we are being attacked as we march. Prayers please. Very bad. I’ve been hit many times already. They are surrounding us. Police won’t arrest them. I am in front protecting our people. This is the craziest thing ever. Over a thousand. This is scary.

Bryan was attending the March for Babies. He and pro-lifers were hit, stepped on, and things have been thrown at him by pro-aborts.

“Got bad again. They (pro-aborts) took over our stage. Ripped down banners,” Kemper said.

As the police cleared the pro-aborts from the stage I jumped up and reclaimed it.

Kemper later reported: “Must be doing something right as my third talk in Melbourne to youth was invaded by pro-abortion activists again. This time they blew air horns and whistles in my ear as I tried to talk with them. Two of them started to converse with me until the police showed up and they ran, only to be caught immediately. They were warned, left, and we finished the talks.”

My friend from Youth for Life Australia who marched with me Melbourne just received a call from the pro-aborts threatening to burn his house down. The opposition is scared about the growing youth pro-life movement here.

Just received a call from a very angry/violent sounding woman. She screamed down the phone “I saw you at that march on Saturday, you’re nothing but a pro-life bigot, child f**ker, you molestering as***le, I know where you live and I’m coing to burn your house down”. Ok I said (among the screams), where do I live? She couldn’t tell me, so I just said as she (kept screaming) “Jesus loves you and will forgive you” she hung up on me and I can’t call her back because she blocked her number. Prayers for that woman today everyone.

Meanwhile, a Victorian MP says he was assaulted when pro-choice and anti-abortion groups clashed in Melbourne.